Please ensure Javascript is enabled for purposes of website accessibility
Log In Help Join The Motley Fool
Free Article Join Over 1 Million Premium Members And Get More In-Depth Stock Guidance and Research
By Maurie Backman - Feb 17, 2018 at 9:18AM

Hint: It's an unavoidable one.

Countless workers look forward to retirement and the carefree lifestyle with which it's often associated. Unfortunately, 28% of today's seniors say life is worse in retirement, and part of that sentiment boils down to financial woes.

Of course, the fact that many seniors today are struggling financially isn't shocking, especially given the number of folks who entered retirement with inadequate savings. But while some of that is a function of negligence and perhaps an overreliance on Social Security, a big reason why so many retirees find themselves low on money is that they underestimate one major expense: healthcare.

What will healthcare cost you in retirement?

Though some living costs tend to go down for seniors once they retire, healthcare is the one expense that's virtually guaranteed to go up. Yet far too many seniors make the mistake of not saving for it appropriately, and assuming that health issues won't rear their ugly head for many years down the line. 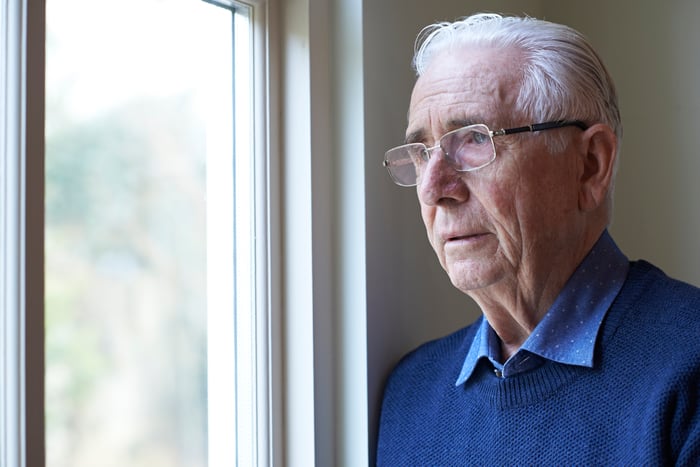 The reality, however, is 34% of seniors claim that health problems are interfering with their retirement, and of those, 75% admit that their issues emerged sooner than anticipated. Worse yet, roughly a quarter of retirees say that the healthcare costs they're facing are keeping them from living the lifestyle they were hoping to enjoy.

Much of this issue stems from a lack of knowledge regarding senior medical costs, and unfortunately, getting educated will only do so much to help those who are already facing mounting bills. But if you're still working, here's a little data that might help you avoid falling victim to the same fate: According to HealthView Services, the average 65-year-old male today will spend $189,687 to cover his medical bills in retirement. The average 65-year-old woman, meanwhile, will spend $214,565. And in case you're wondering about that gap, it's due to the fact that women tend to live longer.

Now here's the kicker: None of these figures take long-term care into account, which means that if you wind up needing a nursing home or assisted living facility, you'll have to cover those bills in addition to the totals above. Furthermore, the above figures assume that you're reasonably healthy. If you have a known medical issue, or are in generally poor health, you can expect your personal tally to rise even more.

All of this means one thing: You must start planning and saving for your senior healthcare costs ahead of time. Otherwise, you risk joining the ranks of those retirees whose outlook is less than sunny.

Many seniors are baffled by their healthcare bills because they expect Medicare to pay for the bulk of their needs. But while Medicare does provide crucial health benefits to seniors, there are many key services it doesn't cover.

That's just another reason why it's so important to save enough to not only pay for your general living expenses in retirement, but your healthcare needs as well. So if the above numbers are way higher than what you expected your medical care to cost you as a senior, use that data as your own personal wake-up call and save more. If you're still working, you still have this option -- even if it means extending your career a bit.

Now obviously, those with a 401(k) have a pretty clear advantage, but if you commit to maxing out your IRA, you stand to accumulate some decent wealth as well. Case in point: Maxing out an IRA between the ages of 40 and 70 will leave you with an additional $560,000 for retirement on top of whatever amount you've accumulated to date, assuming your investments deliver an average yearly 7% return and the current annual contribution limits stay the same. And that's enough to make the above figures sound just a bit less daunting.

Another smart bet? Invest in long-term care insurance. A good 70% of seniors 65 and over will end up needing some type of long-term care in their lifetime, and having a policy to help pay for that expense could help alleviate a large chunk of financial stress down the line.

No matter what steps you take to save for healthcare in retirement, don't make the mistake of remaining ignorant about what could be the single greatest expense you'll face as a senior. You deserve the comfortable retirement you've always wanted, but if you're not careful, your health alone could destroy that dream in an instant.