Please ensure Javascript is enabled for purposes of website accessibility
Log In Help Join The Motley Fool
Free Article Join Over 1 Million Premium Members And Get More In-Depth Stock Guidance and Research
By Maurie Backman - Feb 20, 2018 at 8:48AM

Watch out: These blunders could really trip you up.

Now that tax season is well under way, countless Americans will no doubt spend the coming weeks digging through paperwork and crunching numbers in an effort to get their returns completed. But whether you've been filing taxes for years or are a total newbie, there are certain mistakes that could cause your return to get audited or rejected if you aren't careful. Here are a few such errors you should therefore make a point to avoid.

It's one thing to miscalculate your numbers and put down the wrong deduction, but it's another thing to mess up your basic personal data. Yet each year, loads of Americans do just that. Specifically, the IRS reports that filers commonly make the following mistakes:

Before you submit your taxes, take a few extra minutes to ensure that your personal information is 100% accurate. Otherwise, there's a good chance your return will get rejected, thus delaying whatever refund you're entitled to in the process. 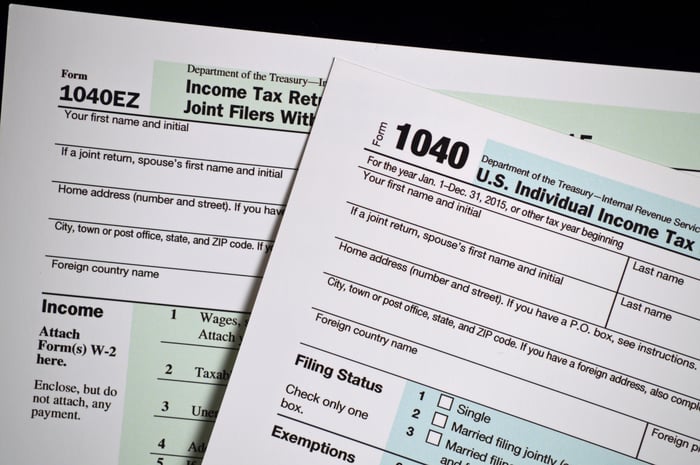 Though many of the tax breaks we've come to know and love met their demise this year, none of these changes impact the 2017 tax year, which means you can still claim a host of deductions on last year's return. But if you're going to take those deductions, make sure you have accurate records to back them up. Guessing at numbers will get you in serious trouble in the event your return is audited, so before you start taking those write-offs, comb through your receipts so that your data is exact.

Similarly, avoid using perfectly round figures when possible while claiming deductions. After all, what's the likelihood that your medical expenses for the year came in at exactly $10,000? You're better off crunching those numbers and giving the IRS less of a reason to investigate.

Those 1099 forms you received this year? You can't just toss them out with the rest of your junk mail. If you earned income from a source outside of your salary, you're required to report it to the IRS -- and you'll find that information on those handy forms. This includes everything from freelance earnings to dividend payments to interest on your savings account. Fail to come clean about that income on your taxes, and the IRS is bound to take notice, since it gets copies of every 1099 that's issued.

Maybe you're the old-fashioned type who prefers to file taxes on paper. Though filing electronically might take some getting used to, you're much better off going this route. First of all, you're statistically less likely to make a mistake if you submit an electronic return. The IRS reports that the error rate for paper tax returns is a whopping 21%, where it's less than 1% for electronic ones.

Furthermore, if you're due a refund, you'll get your money much faster if you file electronically. The IRS expects to issue refunds for electronic returns within three weeks of receipt, and if you sign up for direct deposit, you'll potentially expedite that process even further. It takes an estimated six to eight weeks to get a refund after submitting a paper return, and if yours contains an error, you'll delay that money even more.

The tax filing deadline this year is April 17 -- a couple of days later than normal due to April 15 being a Sunday and April 16 being Emancipation Day, a legal D.C. holiday. Put that date on your calendar and set a series of reminders so you don't forget it, because filing your taxes late could produce some serious consequences if you happen to owe the IRS money.

Specifically, if you're late submitting your return, you'll be penalized to the tune of 5% of the amount you owe per month, up to a maximum of 25%. That's 10 times the monthly penalty you'll face for filing your return on time, but paying your tax bill late.

If you really can't get your taxes in order by April 17, file for an extension before that deadline to buy yourself more time. Keep in mind, however, that an extension won't get you out of paying your tax bill by the initial deadline; it'll only help you avoid the failure-to-file penalty.

The more careful you are with your taxes, the less hassle and aggravation you'll face this season. So do yourself a favor and allocate a little extra time to not only prepare your return, but review it for errors. It's an investment you'll appreciate having made.