Paid family leave became a hot-button issue during the 2016 presidential campaign, with both candidates suggesting that making benefits available to new parents would have a positive impact on the working environment for Americans. More recently, efforts led by Assistant to the President Ivanka Trump and Sen. Marco Rubio (R-Fla.) included a proposal that would allow people to pull forward money from Social Security to pay for family leave in exchange for deferring retirement benefits by a similar period later in life.

At the federal level, proponents of the plan argue that providing a choice to working families in a way that is revenue-neutral is a reasonable solution to the challenge of providing paid parental leave. Opponents argue that Social Security itself is in dire financial straits without putting any more pressure on it, and that alternatives to provide paid family leave could be affordable.

For residents in four states, however, the issue is moot, because they already have paid family leave . By looking at how these four states structured their laws, policymakers who favor making paid family leave universal could get some insight into various ways to implement similar proposals nationwide. 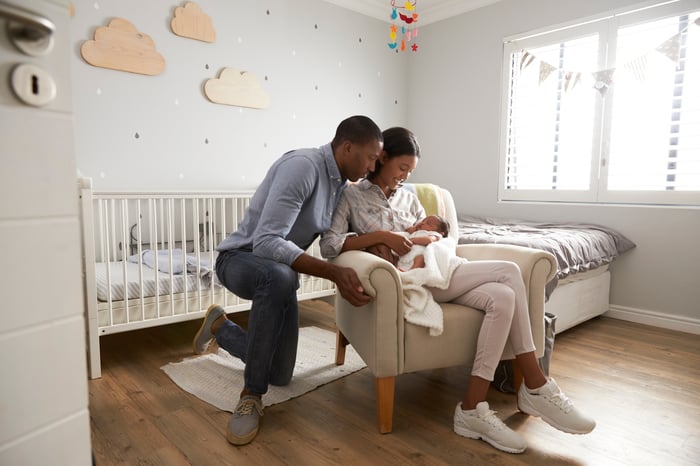 California began to offer paid parental leave benefits in 2004. Offered through the state's disability insurance program, the state offers mothers up to four weeks of benefits for a normal pregnancy before the expected due date, as well as up to six weeks for normal deliveries or eight weeks for Caesarean section births. Parents other than the mother can get up to six weeks of benefits.

To be eligible, you must claim the leave within 12 months and have paid into the state disability insurance fund over the past five to 18 months. For claims in 2018 or later, weekly benefits can range from $50 to $1,216. The intent is to provide a replacement rate of about 60% to 70% of your regular income.

New Jersey's paid parental leave program began in 2009. The benefits are part of the state Department of Labor and Workforce Development's insurance program, and parents can get up to six weeks of benefits to bond with a newborn or adopted child within the first year of parenting. Benefits replace about two-thirds of income.

Under the program, you must give your employer 30 days' notice before the leave starts, and the leave must be more than seven consecutive days long. Employers must give permission for you to take leave in non-consecutive periods. Moreover, unlike in California, there's no state law protection from your losing your job, although federal law might provide some protection in that regard.

To get benefits, you need to have earned a set minimum amount and paid into the Temporary Caregiver Insurance fund. Wage replacement is equal to about 60% of income, with a minimum of $84 per week and a maximum of $795 per week.

Employees are eligible after 26 weeks of full-time employment. Part-time workers can also qualify once they've worked at least 175 days, even if they work less than 20 hours per week. Employees pay contributions through payroll deductions in order to fund the benefits.

The future of parental leave

Other states aren't waiting for the federal government to take the lead. Washington state enacted provisions last year that will take effect in 2020, under which employers and employees will both contribute payroll tax revenues toward funding benefits of as much as 90% for low-wage workers for up to 12 weeks. Similar proposals are popping up in other locations.

Paid parental leave has widespread support, but how to fund it is a topic of great debate. By looking at the successes of these four states, lawmakers should be able to find a path forward that can meet the needs of parents while remaining true to their respective views on fiscal responsibility.

Editor's note: A previous version of this article erroneously stated that the New York program was partially funded by employer contributions. The author and the Fool regret the error.