Though the need to save independently for retirement exists among men and women alike, it's perhaps even more imperative that women step up their game. That's because women are likely to live longer than men and, as such, are likely to need access to more income during their golden years than their male counterparts.

Unfortunately, most women don't really know what it'll take to achieve a secure retirement. In a recent Transamerica study, women said they would need a median savings balance of $500,000 to be comfortable in retirement. More than half of the women surveyed, however, simply guessed at that figure. 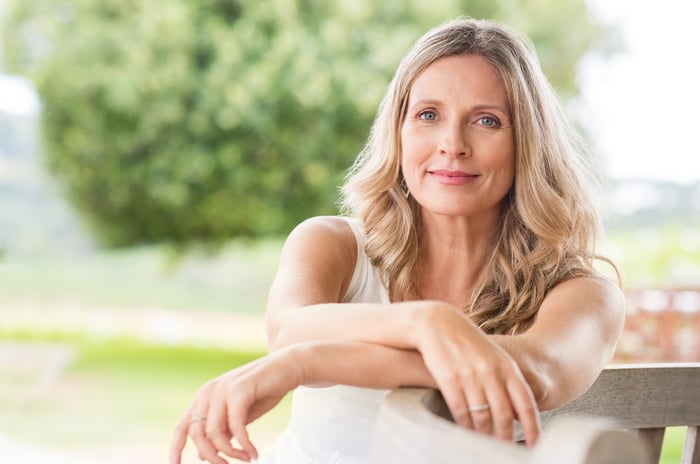 What's worse than that, however, is that women have saved a median of just $34,000, and while we don't have an age breakdown for that figure -- meaning, some of the women with that balance could conceivably be in their 20s or 30s -- it's pretty safe to say that plenty of older women are approaching retirement with nowhere close to the amount of money they'll need to sustain themselves.

If your goal is to attain financial security in retirement, you'll need to do two things: accurately assess your savings needs, and ramp up your savings rate. Otherwise, you could be in for quite the financial blow down the line.

At first glance, $500,000 might seem like an impressive amount of money. But when we consider the fact that women tend to have longer life spans, that number starts to erode.

Still, let's crunch some numbers to see how that $500,000 stacks up. As a general rule, you can expect to safely withdraw around 4% of your savings each year in retirement without running the risk of prematurely depleting your nest egg. Of course, this 4% isn't the right withdrawal rate for everyone, but it's a decent benchmark to work with. When we apply this rate to a $500,000 balance, that allows for $20,000 a year in income. Meanwhile, the average Social Security recipient today gets about $17,000 a year in benefits. Combine these two numbers, and you're looking at about $37,000 a year.

Is that enough? It depends on your lifestyle and goals -- and also your health. It's estimated that the typical 65-year-old woman will spend $214,565 on medical costs in retirement, not including long-term care. Over a 25-year period, that's roughly $8,600 annually, which means that if you're working with $37,000 per year of income, you'll lose a quarter of it to medical bills.

Furthermore, keep in mind that that $37,000 may not be yours free and clear of taxes. If you're housing your savings in a traditional retirement plan, the IRS gets a share of your withdrawals.

The point here is that while $500,000 might seem like a lot of money to work with in retirement, that figure may not be adequate. And given that countless women aren't even close to having that much saved in the first place, it's clear that they have some work to do.

If you're behind in building your nest egg but have a number of working years ahead of you, here's some good news: Some modest lifestyle changes can help you bridge that savings gap. If you're willing to rethink your budget and cut costs to free up, say, $300 a month more in savings, it'll go a long way over time. In fact, setting aside an additional $300 more than you're currently saving per month for 30 years will pad your nest egg by $340,000, assuming your investments generate an average annual 7% return, which is more than doable with a stock-heavy portfolio. And that, on top of what you're already saving, could go a long way.

If you're further along in your career, you'll need to take a different approach -- namely, by slashing your expenses and aiming to max out your retirement plan contributions, or get as close as possible. Currently, workers 50 and over can contribute up to $24,500 per year to a 401(k), and $6,500 a year to an IRA. Max out the former for just seven years, and you'll have an additional $212,000 for retirement, assuming that same average 7% return.

Another option? Extend your career. Rather than retire at 65, do so at 67, or 70, or 72. This will not only allow for more savings, but prevent you from tapping your nest egg for a few extra years. And that, in turn, might buy you a larger yearly withdrawal rate when you need it.

Whether $500,000 in savings will suffice in retirement will depend on a number of factors, but if you're nowhere close and are looking to amass that much, you'll need to step up your game immediately. It won't be easy, but you'll be thankful for that additional cash when you're older.