When it comes to all things financial, women are often portrayed as having a major disadvantage. After all, females, generally speaking, earn considerably less than their similarly qualified male counterparts, and studies have shown that men are generally more knowledgeable about retirement planning than women.

But despite certain shortcomings and disadvantages, women are managing to hold their own when it comes to investing. In fact, new data from Fidelity proves that females on the whole are actually better investors than men. Here are just a few reasons for that. 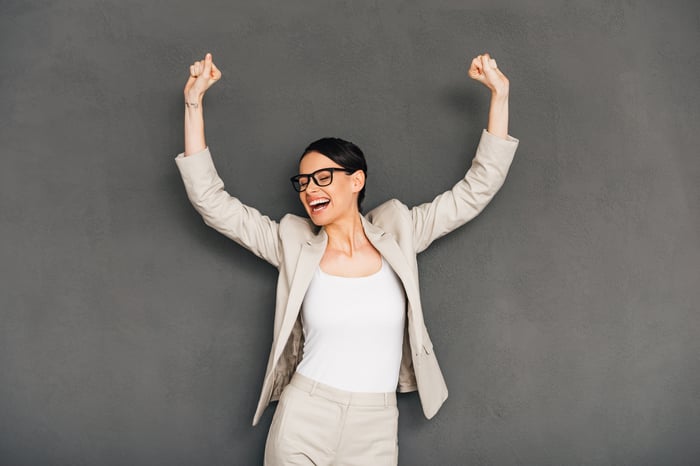 Fidelity analyzed over 8 million investment accounts and came to the following conclusion: Women's portfolios tend to deliver higher returns. Specifically, female investors outpaced males by 0.4% annually, and while that may not seem like a lot at first glance, remember that it could have a major impact over the course of a 20-, 30-, or 40-year savings window. In fact, Fidelity estimates that for a 22-year-old worker starting out with an annual salary of $50,000, a female investor will come away with over $275,000 more than her male counterpart by virtue of higher returns coupled with higher savings rates.

2. Women save more in the first place

Despite the fact that men tend to significantly out-earn women for the most part, females tend to save at higher rates. Fidelity reports that women set aside an average of 9% of their paychecks each year for workplace retirement savings, compared to 8.6% for men. And when it comes to nonworkplace accounts, like IRAs, women tend to save more as well.

3. Women are less likely to take on needless risk

Another advantage women have on the investing front is their tendency to not take on unnecessary risk. Fidelity looked at retirement accounts over the past three years and found that the percentage of women invested appropriately based on their age has increased by roughly 40%. In fact, women are more likely to have a proper age-based asset allocation than men in general. Specifically, females tend to gravitate toward target date funds more so than men, which means they gain exposure to a diverse investment mix that's appropriate for their stage in life.

4. Women have the right attitude

When it comes to investing, patience is often key. And in this regard, women have a definite edge. Fidelity reports that women tend to build financial plans to meet their life goals rather than fixate on investment performance along the way. And it's this long-term approach that often prevents them from reacting to market downturns and making rash decisions that result in losses.

Clearly, women are doing a bang-up job at investing. But if there's one thing they do need to get better at, it's giving themselves credit. Without sharing the above data, Fidelity asked clients who they guessed would have the best portfolio performance, and only 9% of women thought they'd outperformed their male counterparts. What this means is that women's confidence levels are seriously misaligned with their abilities, and that's something they ought to strive to fix. After all, in a world where men often get to walk away with bragging rights, women need to stake their claim and start acknowledging and celebrating their successes.