Thus, you -- and just about every other retiree or pre-retiree -- has a decision to make: when to start collecting that vital income. There are some solid reasons to do so as early as possible, but here are three solid reasons to delay. 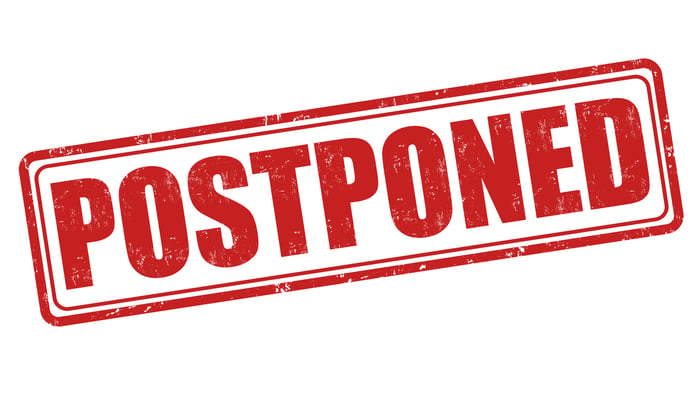 1. Delay because you're still working.

First off, you might want to delay taking Social Security benefits if you're still working. This may not apply to you, though, as the most common age at which people retire was recently 63, and the most common age at which people start collecting Social Security is 62. Many people, after all, don't get to choose when they retire -- they may, for example, fall ill, get downsized out of a job, or end up having to care for a loved one.

Working a few more years before retiring or working in retirement, at least a little, can generate welcome extra income. Postponing retirement entirely can also vastly improve your future financial health, as your retirement war chest will keep growing, while you put off having to tap it -- and you might enjoy employer-sponsored health insurance, too. Check out how much more money you might accumulate over various periods:

Another reason to delay starting to collect Social Security is that you can make your ultimate checks bigger that way. For every year beyond your full retirement age that you delay starting to collect Social Security, your benefits will grow by about 8%. Delay from age 67 to 70 and your checks will be about 24% bigger. If your full benefits would have been $2,000 per month, they would grow to $2,480 -- that's a meaningful difference of $5,760 over a year. This strategy will only make sense in some situations, though.

That's because, according to the Social Security Administration, "If you live to the average life expectancy for someone your age, you will receive about the same amount in lifetime benefits no matter whether you choose to start receiving benefits at age 62, full retirement age, age 70 or any age in between." That's because while checks you receive early will be smaller, there will be many more of them. So for those who live average lifespans, it's pretty much a wash and collecting at 62 or soon after can be perfectly sensible.

But -- if you think you stand a decent chance of living an extra-long life, delaying and receiving larger checks can help you get more out of the program.

3. Delay because you're strategizing with your spouse

Finally, delaying starting to collect your Social Security benefits can be a good thing to do if it's part of a spousal strategy. Married couples have more options when it comes to collecting Social Security benefits than single individuals do (though widows and divorced people also have some extra options), so if you're married, be sure to coordinate a strategy with your spouse. This can be especially valuable if there's a great disparity in the earnings history of the two partners or if there's a great difference in ages.

Know, for example, that if two spouses are collecting benefits and one dies, the surviving spouse can collect the higher of the two benefit amounts. Thus, it can be smart for at least one spouse -- ideally the one who has been the higher earner -- to delay collecting benefits to increase the size of their eventual checks. That way, you get some income early, and more income after a few years, and if the spouse with the bigger benefit check dies first, the surviving spouse can collect that bigger benefit check instead of his or her own smaller one.

The average monthly Social Security retirement benefit was recently $1,407, which amounts to nearly $17,000 per year. You will, of course, receive more if your earnings were above average during your working life. Still, though, it's worth learning more about Social Security and taking steps to get the most out of the benefits you receive.