Early 401(k) distributions are usually a bad idea. You might face not only taxes and penalties, but long-term consequences as well.

The purpose of a 401(k) is to provide retirement income, so the last thing you ever want to do is access that money while you're still working. But if times get tough and you grow desperate for cash, you might be tempted to tap that account early and access the money that's technically yours.

Taking an early 401(k) withdrawal might seem preferable to borrowing the money from another source or resorting to credit card debt. But there are consequences to removing funds from 401(k) plans before age 59 1/2. Not only will you face taxes and penalties on your distribution, but your retirement plan will have less money left in it for when you're older. And that's equally problematic. 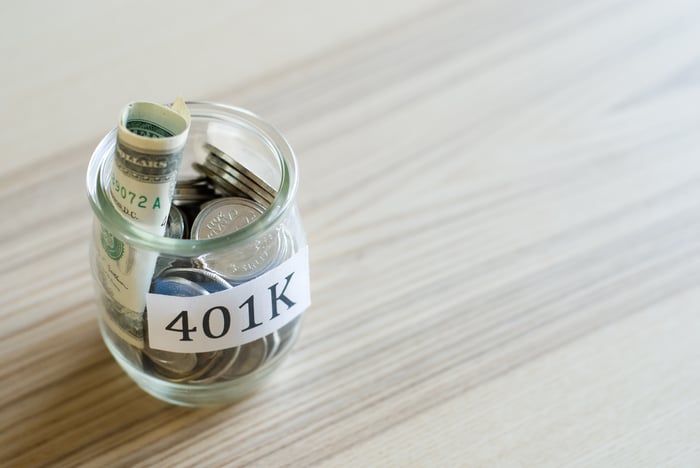 When you fund a traditional 401(k) plan, the money you contribute goes in tax-free -- and that's a nice incentive to participate in such a plan. In exchange for that tax break, however, the IRS wants you to leave that money alone until you reach 59 1/2. Attempt to access that money sooner, and you'll typically face a 10% early-withdrawal penalty on the sum you remove. This means that if you take a $10,000 distribution at age 32 to buy a new car, you'll lose $1,000 as a penalty fee right off the bat.

Furthermore, any time you remove funds from a traditional 401(k), that distribution is taxed at your ordinary income tax rate. This holds true whether you withdraw money early or so during retirement, when you're supposed to. In the preceding example, in addition to losing $1,000 to that pesky early-withdrawal penalty, you'd also lose a chunk of that $10,000 to taxes. In fact, if we apply a 24% tax rate, that means that of that $10,000 distribution, you walk away with just $6,600. Ouch.

Don't put your retirement in danger

Taxes and penalties aside, another big reason you don't want to take an early 401(k) withdrawal is that you'll risk having inadequate funds to cover the bills as a senior. Remember, the purpose of a 401(k) is to provide retirement income, so any time you remove a portion of your account balance, that's money you won't have in the future.

Now in our example, we talked about withdrawing $10,000 ahead of schedule, which may not seem like such a catastrophic amount. But one thing you need to realize is that in this scenario, it's not just $10,000 you're losing out on; you're also missing out on the growth that money could otherwise achieved.

Imagine your 401(k) investments generate an average return of 7% per year over time (which, incidentally, is more than doable with a stock-centric allocation). If you withdraw $10,000 at age 32 and retire at 62, you won't just have $10,000 less at that point; you'll have $76,000 less by virtue of having missed out on that money's growth. And that's a lot of cash to go without when you're retired and on a fixed income.

The best way to avoid 401(k) early-withdrawal penalties is to leave that money alone until you reach 59 1/2. However, there are certain scenarios where you can access that money early and possibly avoid a penalty. For example, if you're at least 55 and separate from the company sponsoring your 401(k), you can take your money without losing that 10%. Similarly, if you become permanently disabled or have medical expenses that exceed 10% of your adjusted gross income, the early-withdrawal penalty may not apply. But unless you happen to qualify for an exception, you'll usually face a 10% penalty for removing 401(k) funds ahead of schedule.

One final thing: Be careful when rolling your 401(k) into another retirement plan. Workers who leave their jobs will often opt to roll their 401(k)s into IRAs rather than leave their money in an old employer's plan. But if you don't transfer that money into your new retirement account within 60 days, it'll typically get treated as a distribution, which means you'll face not only taxes, but also that 10% penalty if you're under 59 1/2.

No matter how you look at it, withdrawing funds early from a 401(k) doesn't tend to work out well. It pays to exhaust all other options before going this route, because depending on the sum you remove from your 401(k), the repercussions could be tremendous.