We're all warned to save for retirement, especially since Social Security won't do a good enough job of helping the typical senior pay the bills. But the bulk of Americans aren't focusing on their financial future as much as their credit card rewards. ValuePenguin reports that 61% of U.S. households are enrolled in at least one credit card rewards program, while only 58% have money in a retirement savings product. And that's a problem on multiple levels.

Is your credit card thwarting your retirement savings?

Let's be clear: There's nothing wrong with having a credit card and utilizing its rewards program, provided you do so responsibly. After all, you might as well get free money, or other bonuses, for buying the things you need. The problem, however, is that countless Americans use their credit cards recklessly, so much so that credit card debt is at an all-time high nationwide. Furthermore, though there's not necessarily a direct link between credit card usage and retirement savings, it stands to reason that the more debt you rack up, the less able you'll be to save for the future. That's because you'll end up throwing money away on interest that could otherwise fund an IRA or 401(k). 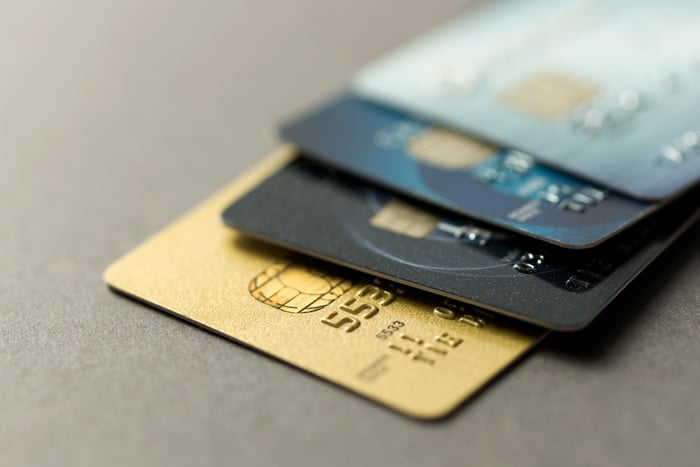 Imagine you find yourself with a $2,000 credit card balance you can't pay off. That may not seem like a ton of money, but at 20% interest annually, you'll lose close to $450 if it takes you two years to pay it off. And that's $450 that could've gone into a retirement plan instead.

Now, is a single contribution of $450 enough to fund your golden years? Absolutely not. But if that $450 is one of many contributions, it can go a long way.

Also, keep in mind that for every opportunity you miss to fund a retirement plan, you lose out on not just the principal sum you're not saving, but the growth it might achieve. Let's say you're able to invest your retirement savings at a 7% average annual return, which is more than doable with a stock-focused portfolio. If you waste that $450 on interest around age 25 instead of sticking that sum in an IRA or 401(k), then come age 65, you'll have lost out on over $6,700. And that's a much more sizable sum.

Regardless of how wisely you use your credits cards, there's no excuse not to have a retirement savings plan. If your employer doesn't offer a 401(k), there's always the option to open an IRA. Either way, you'll need to commit to making steady contributions throughout your career if you want a shot at a secure retirement.

Still not convinced? Then think about it this way: The average Social Security beneficiary today collects just under $17,000 a year. If that sounds like enough money to live on when you're older, then go ahead and keep neglecting your savings. Otherwise, start funding that retirement plan immediately. Currently, you can contribute up to $18,500 per year to a 401(k) if you're under 50, and $24,500 if you're 50 or older. IRAs, meanwhile, max out at lower limits -- $5,500 a year for workers under 50, and $6,500 for those 50 and over -- but they still allow for some sizable savings over time.

While there's no need for credit cards (with or without rewards programs) and retirement plans to be mutually exclusive, don't let the former stop you from funding the latter. In fact, if you are going to have both, why not use your rewards cash to fund your long-term savings? This way, you'll get the best of both worlds: free money and a chance to retire comfortably.