Please ensure Javascript is enabled for purposes of website accessibility
Log In Help Join The Motley Fool
Free Article Join Over 1 Million Premium Members And Get More In-Depth Stock Guidance and Research
By Maurie Backman – May 5, 2018 at 6:47AM

Social Security can help seniors pay the bills -- but it shouldn't constitute the bulk of their income.

Millions of seniors depend on Social Security to pay the bills in retirement. But 67% of retirees today consider those benefits a major source of income, according to the Employee Benefit Research Institute. And 36% of current workers say Social Security will be a major income source once their careers come to a close.

So what's wrong with having Social Security serve as a primary income stream? For one thing, the program just isn't equipped to do that. Additionally, Social Security is facing a future shortfall that, if left unaddressed, could result in major benefit cuts. Therefore, while there's nothing wrong with counting on Social Security to provide some income in retirement, planning on it for the bulk of one's income is hugely problematic. And the sooner current workers realize that, the better positioned they'll be to avoid financial troubles down the line. 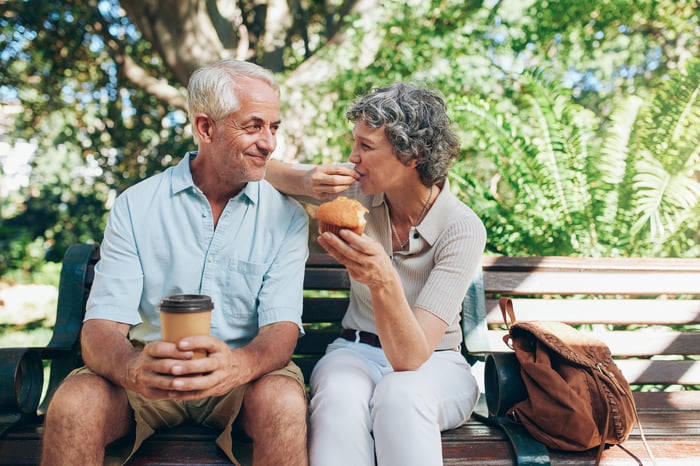 How much should you count on Social Security?

Let's be clear about one thing: Despite the rumors you may have heard, Social Security is by no means in danger of going broke. The reason boils down to the fact that it's funded by payroll taxes, which means that as long as we have a workforce, the program will have money coming in, and therefore will manage to continue paying benefits.

The problem, however, is that we'll soon reach a point when Social Security starts paying more in benefits than it collects in taxes. Once that happens, it will have to dip into its trust funds to make up the difference, but those funds will only last so long. As per the latest estimates, they're set to run dry in 2034, at which point recipients might see as much as a 23% reduction in benefits. In other words, the seniors who are used to collecting a certain amount of money today might have to settle for less down the line. And that could drive those who depend too heavily on those benefits straight into poverty.

But let's be optimistic and assume that Social Security won't face future cuts. Even in that scenario, those benefits still won't be enough to sustain, or even mostly sustain, the average senior. Most retirees need around 80% of their former income to pay the bills once they stop working, and if that percentage sounds high, remember that while certain living costs tend to go down for seniors in retirement, other major ones, like healthcare, tend to go nowhere but up. Now without a future reduction in benefits, Social Security will replace about 40% of the typical worker's pre-retirement earnings. But as you can see, that's still only, in a best-case scenario, about half of what the average senior will need.

That's why it's so scary to hear that the bulk of retirees today consider those benefits a major source of income, and that more than one-third of workers say the same. The reality is that if you want a shot at a secure retirement, the best way to get there is to save independently. Otherwise, you could face your share of financial problems at perhaps the most vulnerable point in your life.

The fact that 75% of Americans live paycheck to paycheck means that most are letting their savings fall by the wayside. But one thing to realize about building a nest egg is that if you start early enough, you can use the power of compounding to turn a series of relatively modest contributions into a sizable sum over time.

On the other hand, if you put off saving until you're closer to retirement, you'll need to set more money aside each month to achieve a similar result. Case in point: If you narrow your savings window to just 15 years, you'll need to sock away $1,600 a month to get to a total of $480,000, or close to $2,400 a month to hit $720,000. And if you decide not to save any money for the future and bank on Social Security instead, you should know that the average recipient today collects less than $17,000 per year. And chances are, that's not enough for you to live on.

While it makes sense to assume you'll get some income from Social Security once you stop working, don't make the mistake of counting on those benefits to pay the bulk of your bills. Otherwise, you may be in for a financially fragile retirement, and a miserable one at that.