Please ensure Javascript is enabled for purposes of website accessibility
Log In Help Join The Motley Fool
Free Article Join Over 1 Million Premium Members And Get More In-Depth Stock Guidance and Research
By Michael Douglass - May 5, 2018 at 5:18PM

Personally, I find the fifth the most convincing.

A full 63% of Americans fear running out of money in retirement more than they do death. That's in part because -- let's face it -- life expectancies are increasing, and retirement savings are declining.

There are a number of options to make the math work better -- and one of the big ones is to delay retirement, by as much as five years. Here are five reasons that's an option worth considering. 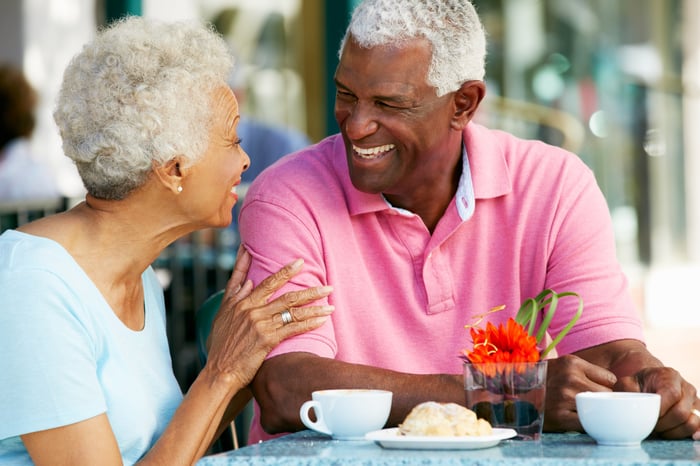 1. You get more time to build up your savings

The vast majority of Americans are way behind on their retirement savings, and a few extra years of turbocharging your nest egg might be just the thing to help you get over the finish line. With a few more years of work, you get the chance to stash some cash before calling it quits (hopefully) for good. In 2018, those nearing retirement (age 50 and up) get to take advantage of additional incentives to save: They can make "catch-up" contributions of an extra $6,000 annually to a 401(k) (above the $18,500 others can contribute) and an extra $1,000 to an IRA (above the regular $5,500 contribution limit).

If you're 65 and have a $500,000 nest egg growing at 4% annually (which assumes a conservative stock-bond mix appropriate for someone nearing retirement), and you make catch-up contributions to your IRA and 401(k), that $500,000 becomes over $767,000 in just five years. That's a 50% bump in your nest egg, which means 50% more that you can withdraw each year, assuming you spend the same amount of time retired.

2. Your savings don't have to last as long

But the fact is, you probably won't be retired as long -- you'll be five years older and, although there are some longevity benefits to retiring later (more on that in a bit), you will probably still spend less time in retirement. That means your savings won't have to stretch over as many years.

Even if you aren't able to add to savings during those final few years of work, you can draw them down much more aggressively if you only expect to live, say, 20 more years as opposed to having to stretch things out over 25 or 30. Don't forget the added benefits of compounding, too -- a $500,000 nest egg (without any active additions) growing at 4% annually for five years will become just over $608,000.

3. Social Security will give you a raise

The federal government will pay you to wait to start your retirement, too. If you delay retirement until 70, the Social Security Administration will give you a substantial bump (on average, about 8% per year for each year you delay your retirement).

Let's say you're 65 today and plan to retire this month, and that you earn the Census-defined median household income of $57,617 in 2016-adjusted dollars. The Social Security Administration's benefits calculator estimates that your Social Security retirement payout would be roughly $1,355 a month. Delay until 70 (that is, April of 2023), and that jumps to $2,082 per month.

There's another benefit here, too. Your Social Security payout is calculated based on your 35 highest-income years. If you didn't work a full 35, then you have zeroes for some of those years. Working a few extra years helps you add to that number and erase some of those zeroes. Even if you did work for 35 years, some of the early years in your career were probably lower-earning than your current ones -- so you can boost your payout by getting some higher-earning years on the books.

4. You could have an encore career

There are also non-financial reasons to work longer, and we'll focus on those for the last two points here. If you're in a not-terrible spot financially, working longer gives you the opportunity to begin a new career that fulfills you in different ways than your penultimate job. If you've always wanted to work in nonprofits but stayed away because the money wasn't great, now might finally be your chance. Or if there's some other organization you've long admired, but you didn't feel comfortable making the jump, here's an opportunity to move.

5. It reduces your chances of dying

Surprisingly, a study published in 2016 showed that those who delayed retirement to age 66 had an 11% lower chance of death than those who retired a year earlier at age 65, after controlling for a number of outside factors including self-reported health and income. While I'm not aware of any studies measuring the effects of a five-year delay (from 65 to 70), we can speculate that the longevity benefit could be even longer.

Work has some less pleasant components (bad bosses, anyone?), but it can help as people seek meaning and a routine. This is particularly true if you're in an encore career, driven more by passion than a desire for a ton of money.

Working until 70 isn't for everyone. If your health is poor or you're thoroughly burned out, and you have plenty in the bank, an earlier retirement might be better for you. It's a personal choice. But there are some pretty good benefits to holding off your retirement -- even for just five years -- so consider whether that will help you in the quest to live your best life.