Please ensure Javascript is enabled for purposes of website accessibility
Log In Help Join The Motley Fool
Free Article Join Over 1 Million Premium Members And Get More In-Depth Stock Guidance and Research
By Dan Caplinger - May 6, 2018 at 7:45AM

There's really no reason to do this.

After you spend a lifetime making sure that your retirement will be a financially secure one, the last thing you can afford to do is to make dumb mistakes. Yet it can be challenging to know exactly what all your options are with your retirement savings, and a surprisingly large number of people make big mistakes that can dramatically and needlessly reduce the effectiveness of the financial planning over the course of their careers.

Having a 401(k) or similar plan at work can be a great way to save for retirement, and most workers who have access to 401(k)s feel a lot more confident about their retirement prospects, according to the latest Retirement Confidence Survey from the Employee Benefit Research Institute. But one thing many people don't know is what to do with the money in their 401(k) plans after they leave work. Although there are several good options for dealing with 401(k) assets, one common mistake is almost always a no-no. 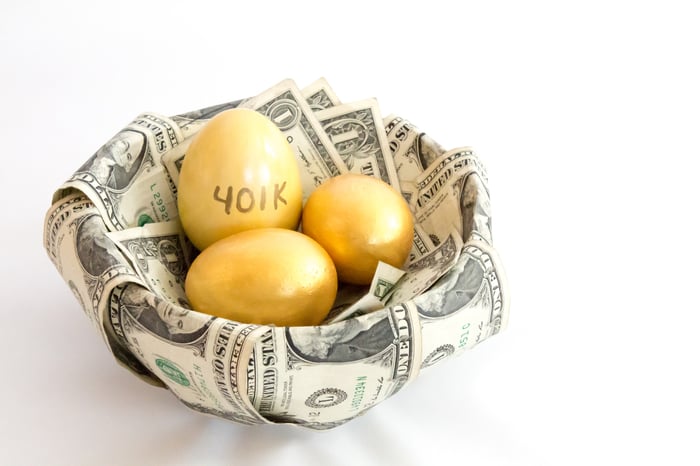 How people handle their 401(k)s after retirement

There are many options for what to do with money in a workplace retirement plan account like a 401(k) after you retire. Leaving the money in the 401(k) is usually an option even after you've left work, as employers can only force you to leave the plan if your balance is extremely low. You also have the option of taking the money out of the 401(k) plan. A rollover to an IRA in your individual name is always an option, or you can simply cash the money out and do whatever you want with it.

Here's how typical retirees handled their 401(k) plan accounts, according to the survey:

As you can see, the vast majority of people either kept their money inside the 401(k) or rolled it over into an IRA in their own names. Both of these strategies can make sense, with the best answer depending on your own particular investment preferences and the options that the 401(k) plan offers. Some 401(k) plans give you access to low-cost institutional mutual fund share classes that are cheaper than similar funds that you'd be able to use in an individual IRA, and for those who prefer to use mutual funds for their investing in retirement, reaping the benefits of those lower costs by staying in the 401(k) plan can pay off. Others who either have higher-cost 401(k) investing options or who want to choose investments that their 401(k) doesn't offer, such as individual stocks or exchange-traded funds, are often better served by rolling over their assets to an IRA.

Not the usual complaint

If you've read a lot of financial advice, you're probably used to seeing people get criticized for cashing out their 401(k)s and spending the money. For younger workers who are simply switching jobs, cashing out is indeed a bad move, because it forces them to pay taxes plus a 10% penalty on their money and prevents them from getting the big tax benefits of retirement accounts for the remainder of their careers.

Yet for retirees, cashing out and spending the money isn't as bad. You'll still pay tax, but no 10% penalty will apply. And depending on the size of the account and whether you have other assets available, it might be simplest and most efficient to use your 401(k) money to fund a purchase you were planning to make anyway.

Instead, what the biggest mistake that the survey shows is cashing out a 401(k) and putting the money into another investment or savings account. The reason: You can use rolled-over money in an IRA to make just about any investment you'd like, including putting money in a simple savings account. By doing so, you avoid the upfront taxation on those assets, instead letting you parcel out your tax liability as you draw down the account for later spending. If you have enough money to justify investing, then the tax impact is likely a big enough deal to warrant the modest extra work involved in doing an IRA rollover.

Be smart with your money

Retirement shouldn't be stressful, but it's important not to make needless mistakes. By either rolling over money you don't need for immediate spending into an IRA or keeping it in your 401(k) account, you'll preserve the tax benefits that your retirement savings enjoy for as long a time as possible.