Please ensure Javascript is enabled for purposes of website accessibility
Free Article Join Over 1 Million Premium Members And Get More In-Depth Stock Guidance and Research
By Dan Caplinger - May 10, 2018 at 6:48AM

Here's how to get the monthly income you want.

In the past, workers often could rely on having two sources of retirement income: Social Security and the pension their employer paid them. Having two reliable monthly checks coming in made it possible to have a financially secure retirement without necessarily having a lot of outside savings.

Now, though, most companies don't offer pensions, and it's critical to save money for retirement in order to supplement Social Security payments that, in nearly all cases, are inadequate to cover your living expenses. If you have a retirement nest egg, one thing you can do with a portion of your savings is purchase what's known as an immediate annuity. By doing so, you can essentially build your own pension and get a guaranteed income to supplement Social Security for the rest of your life. 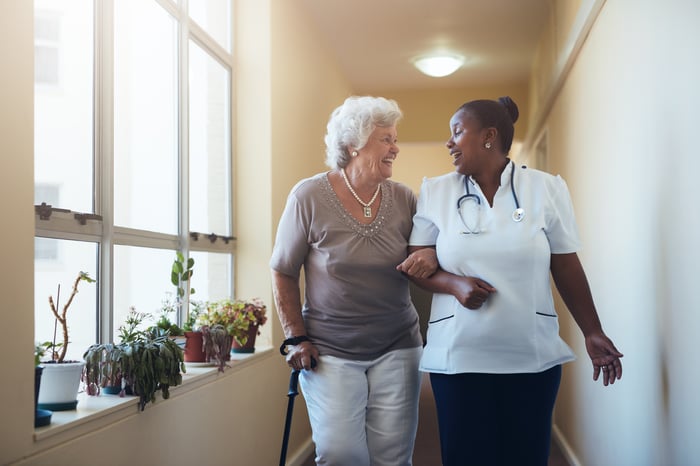 What is an immediate annuity?

An immediate annuity is a contract that insurance companies sell. To purchase an immediate annuity, you make an up-front premium payment. In exchange, the insurance company agrees to pay you a set amount each month for the rest of your life. You can also add on some other features, such as having the contract pay out not just over the course of your lifetime, but also for as long as your surviving spouse lives after you pass away. Of course, these extras come with a price.

As with any investment, immediate annuities involve risk. The biggest one is that with most immediate annuities, if you die shortly after purchasing the contract, then you'll end up having gotten a lot less in total monthly payments than the premiums you paid. That said, the insurance company also takes on the opposite risk that you might live well beyond your life expectancy, making the amount you initially paid insufficient to cover subsequent payments. When the insurance company averages out all the people buying immediate annuities, it hopes to make a profit overall, even if it loses money on some policies for those who live and collect payments for a long time.

How big a pension can you build?

The amount of money you'll receive in monthly payments depends on your age when you buy the annuity and how big a premium you pay, but it also varies depending on prevailing interest rates. Over the past several years, rates have been low, and that unfortunately translates to smaller amounts of monthly income produced by the annuity.

For instance, a typical 65-year-old man spending $100,000 on an annuity could expect to get about $545 per month in income for the rest of his life, according to recent numbers from the website immediateannuities.com. A 70-year-old man could get roughly $625 per month, while a 70-year-old woman would receive just over $585 per month because of women's longer life expectancies. The amounts paid vary by insurance company, so it's important to shop around for the best payout.

The alternative to building your own pension

Some people aren't comfortable with annuities and the insurance companies that sell them, noting that their profit motive often leads to high costs and subpar returns. One alternative is to invest your money in a combination of bonds and stocks, taking withdrawals on a regular basis to supplement your income. Invested wisely, your savings can continue to grow, with good odds of lasting throughout your retirement.

But there are two downsides to this strategy. First, you can't absolutely guarantee that you won't run out of money if your investments do poorly. Second, you'll have to take smaller withdrawals in order to have the best chance of having your money last. Using the common 4% retirement rule, a $100,000 portfolio would only generate $4,000 per year -- or $333 per month -- that you could safely withdraw.

That said, the benefit of investing your own nest egg is that it gives you more flexibility. Once you buy an immediate annuity, you can no longer get access to the money you paid for your initial premium. All you can get is the monthly payment. Having your own portfolio lets you take larger withdrawals when absolutely necessary.

Get the income you need

If you want to supplement your Social Security with more guaranteed monthly income, an immediate annuity can be a smart option. Using a portion of your savings to buy an immediate annuity while keeping the rest to invest and grow can give you the best of both worlds -- assuming you've saved enough to do both.