Please ensure Javascript is enabled for purposes of website accessibility
Log In Help Join The Motley Fool
Free Article Join Over 1 Million Premium Members And Get More In-Depth Stock Guidance and Research
By Maurie Backman – May 12, 2018 at 2:36PM

The answer may be less than you’d think.

Millions of seniors depend on Social Security to pay the bills, but many rely far too heavily on the program to cover their living costs. An estimated 34% of retirees expect their benefits to provide anywhere from 90% to 100% of their monthly income, according to the Social Security Administration, and that's just way off.

The fact of the matter is that Social Security just isn't designed to cover all, or even the bulk, of your senior income. So how much should you expect those benefits to provide? 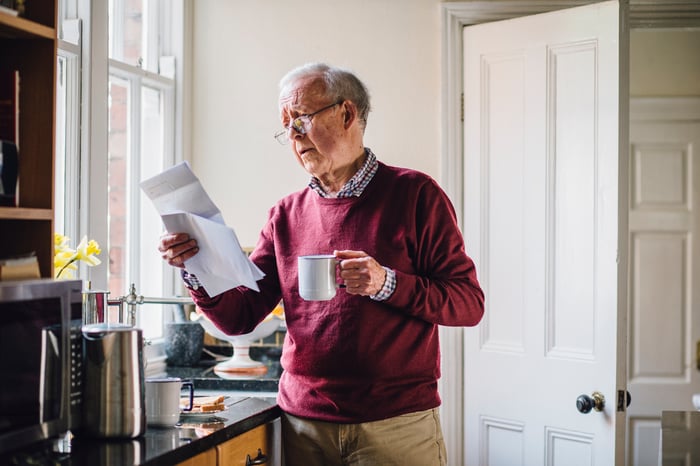 The average senior needs roughly 80% of his or her pre-retirement income to live comfortably, especially when we factor in major expenses like healthcare. Social Security, meanwhile, will replace about 40% of your previous income if you were an average earner. This means that for the most part, you can expect the program to provide about half of your retirement income, leaving you responsible for the remaining half.

This formula, however, assumes that you were an average earner. Because Social Security has a maximum benefit that changes from year to year, workers with pre-retirement earnings above a certain threshold won't see a proportionate increase. So while the program might provide half of an average worker's retirement income, those used to living on much higher salaries won't get as much mileage out of their benefits, but rather, will need to make up the difference with their own savings or additional income streams.

But coming into retirement with savings is crucial regardless of whether you earn a $50,000 salary in the years leading up to it, or a $500,000 salary. And the sooner you realize that, the better positioned you'll be to cover the bills once your career comes to a close.

The amount of money you'll need in retirement will depend on a number of factors, including lifestyle choices, hobbies, and your health. But now that you're aware that Social Security will only, in a best-case scenario, provide about half of the income you'll require (or less, if you're a higher earner), you can take steps to build savings of your own.

If you don't have a 401(k), an IRA is another good bet. Though the current annual contribution limits are much lower ($5,500 for workers under 50 and $6,500 for those 50 and over), if you max out an IRA consistently, you'll amass some nice savings over time.

Of course, not everybody can afford to max out either type of retirement plan. But if you give yourself a long-enough savings window, you'll slowly but surely accumulate wealth by making smaller contributions over time. The following table shows how much your nest egg might grow to if you were to save just $300 a month over various time frames:

That 8%, by the way, is still a bit below the stock market's average, which means that it's doable over a lengthy investment period. Of course, if you're just a few years away from retirement, you'll need to go a bit less heavy on stocks. You'll also need to do better than $300 a month if you want a shot at catching up. But if you were to max out a 401(k) for five years at a relatively conservative average annual 5% return, you'd still wind up $135,000 richer.

Another option, if you're approaching retirement without much savings, is to work a bit longer to grow your Social Security benefits. For each year you hold off on taking benefits past full retirement age (which is either 66, 67, or 66 and a number of months, depending on your year of birth), you'll boost them by 8% up until you turn 70. Get the maximum increase, and you may come to find that those benefits end up providing more than 50% of your senior income (though you should still go in with savings nonetheless).

The more realistic you are about Social Security going into retirement, the easier a time you'll have managing your finances as a senior. It also pays to read up about Social Security and learn how to maximize your benefits so that you get as much money as possible out of the program when you need it.