Inflation has gotten more attention lately, as price increases at the gas pump have taken a bite out of Americans' disposable income. For many, the personal experience of having to pay more for prescription medications, rent, and food makes budgeting increasingly difficult, especially for those on fixed incomes that haven't seen much in the way of boosts to paychecks or Social Security payments lately. Yet official readings from the Consumer Price Index indicate low levels of inflation, running at around 2% per year over the past several years.

Many people jump to the conclusion that the government's inflation numbers deliberately understate true inflation for the American public overall. But the way that the Bureau of Labor Statistics measures inflation won't exactly match with any single person's own spending experience.

For instance, the most commonly cited Consumer Price Index for All Urban Consumers (CPI-U) looks at prices of key goods and services in 75 urban areas, collecting data on thousands of households and retail establishments. It captures 93% of the U.S. population and includes employed, unemployed, and retired people. As the CPI-U measures it, the typical American spends these percentages in major categories of their personal budgets: 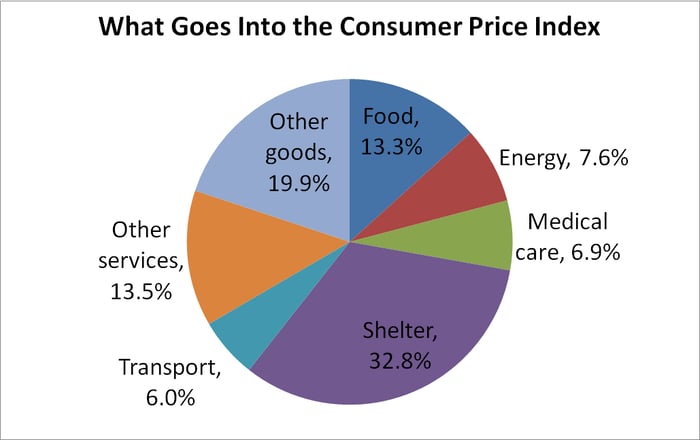 As you can see, the major categories Americans spend on include food, shelter, medical care, transportation, and energy. Yet these costs vary greatly from person to person. Older Americans typically incur more healthcare costs as they age, and many people of all ages have above-average medical needs that make up more than 7% of their spending. Those who have to drive a long way to work incur more in fuel and transportation costs than those who live nearby or can take public transportation. By contrast, while housing costs are high in many urban areas, those who live in lower-cost parts of the country can get away with spending less than a third of their money on rent or a mortgage payment.

Inflation eats away at the purchasing power of your savings, and what's most important in measuring it is how rising prices affect the things that you want and need. You therefore shouldn't be surprised if your personal inflation rate is different from what the official CPI number suggests.