Many people don't follow the stock market very closely, but just about everyone keeps an eye on the price of gasoline. After the price of crude oil plunged in 2014, drivers got long-awaited relief at the pump, with average prices for regular unleaded falling from $3.70 per gallon in the summer of 2014 to $2.04 per gallon by January 2015. Prices even fell below the $2 mark briefly in 2016.

Now, though, gas prices are on the rise again. After going as low as $2.25 per gallon last July, gasoline has climbed dramatically, including a $0.25 move in the past two months to bring the national average to $2.80 per gallon, according to the U.S. Energy Information Administration: 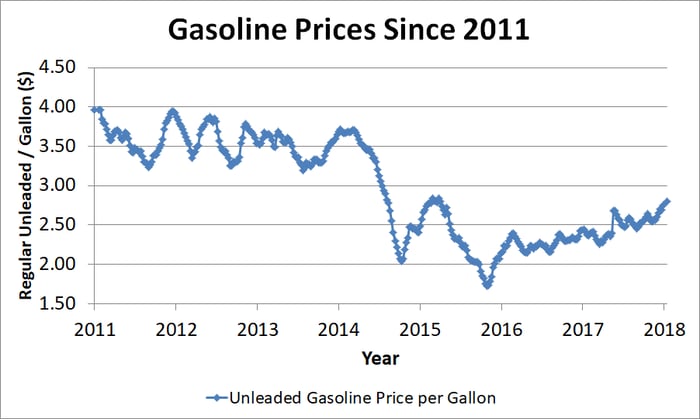 The current level is the highest since 2015, and many experts believe that $3 gasoline is right around the corner as the summer driving season heats up. Already, 13% of gas stations across the country have prices above $3 per gallon, according to AAA. Gasoline prices tend to be highest on the West Coast, and nine states -- Alaska, California, Hawaii, Idaho, Nevada, Oregon, Pennsylvania, Utah, and Washington -- already have averages above the $3 mark. Even in the lowest-cost state (Arkansas), average prices have moved above $2.50 per gallon.

Stock market investors have hoped that the tax cuts that were enacted at the end of 2017 would put more money in consumers' pockets, leading to stronger levels of economic activity. But paying more at the pump could leave less for ordinary Americans to spend on other things, potentially weighing on economic growth.