Please ensure Javascript is enabled for purposes of website accessibility
Log In Help Join The Motley Fool
Free Article Join Over 1 Million Premium Members And Get More In-Depth Stock Guidance and Research
By Maurie Backman – May 15, 2018 at 11:04AM

And they're increasing their likelihood of racking up debt.

There's no question about it: The notion of paying for college is a stressful one for parents and students alike. But compounding the issue is the fact that 45% of parents have no idea how much they should be saving each month for their kids' higher education. That's the latest from a Fidelity study, which also found that parents are underestimating the potential sticker price of a four-year degree by $70,000 on average.

If you're worried about paying for college, you need to do two things: Get a handle on what it costs and develop a savings strategy that'll help you pay for it. Otherwise, you and your children might easily join the ranks of the 44 million Americans who are currently saddled with student debt. 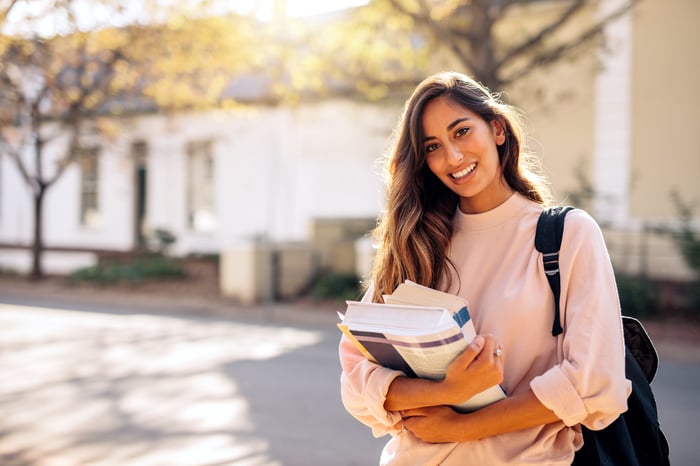 Parents with high school students have an easier time anticipating their kids' college costs than those with younger children, since they can rely on recent data. But as a general benchmark, here's what tuition and fees looked like for the 2017-2018 academic year:

Of course, tuition and fees are only part of the equation. Room and board cost an average of $8,400 at community colleges, $10,800 at public schools, and $12,210 at private universities last year. Throw in books, supplies, and necessities, and you're looking at a pretty sizable bill.

Furthermore, in recent years, college costs have been climbing at a rate of up to roughly 4% per year, which is nearly double the general inflation rate. Therefore, if you're looking at funding an education 10 to 15 years from now, expect the above figures to increase significantly.

But the college picture isn't all bleak. Though the cost of a degree is no doubt astronomical, if you save efficiently and consistently throughout your kids' childhood, you stand a pretty good chance of making a nice dent in those tuition bills.

First, aim to save as much as you can, as early as you can. You might even consider beginning to save for college before your kids are born.

Next, figure out where to house your college savings. This is an important piece of the puzzle, since most parents only have a limited window in which to accumulate a higher education fund.

One option you might consider is a 529 plan. Though contributions are made with after-tax dollars, they get to grow tax-free. Withdrawals are completely tax-free as well, provided they're used for qualified higher education purposes.

Roth IRAs are another college savings option (though higher earners aren't eligible to fund Roth accounts directly). As is the case with a 529, the money you contribute to a Roth goes in post-tax, but then grows tax-free and isn't taxed upon withdrawal.

The benefit of a Roth over a 529 is that it gives you more flexibility with your money. If you end up saving more than what you need for college (an unquestionably good problem to have), you can leave the excess alone and use it in retirement. With a 529 plan, you'll pay a 10% penalty on money not used for higher education purposes (though that penalty applies only to the gains portion of your account, not your principal contributions). On the other hand, Roth IRAs max out at $5,500 a year for savers under 50 and $6,500 for those 50 and over. If you only have a handful of years to establish a college fund, that doesn't give you much to work with.

The benefit of saving in either account type, however, versus a regular savings account is the opportunity to invest and grow your money. Today's banks pay somewhere in the ballpark of 1% interest, but with either a 529 or a Roth, you might easily snag a 7% average annual return across your total investment window. And that could be hugely instrumental in building up savings.

For example, imagine you're able to sock away $450 a month for college over an 18-year period. Stick that money in the bank at 1% interest, and you're looking at $106,000. (Keep in mind, however, that this calculation isn't perfect because it doesn't take taxes into account. When you save in a regular savings account, you pay taxes on your interest income year after year, so in reality, you'd actually be looking at a bit less than $106,000.) But when we apply a 7% average annual return on that same money, we get a total of $183,000. And that could spell the difference between taking on loads of debt and covering your costs.

Though the idea of paying for college might seem daunting, knowing your costs is half the battle. Saving consistently and effectively is the other half. Get both right, and you'll be in decent shape by the time those acceptance letters start rolling in.