Please ensure Javascript is enabled for purposes of website accessibility
Log In Help Join The Motley Fool
Free Article Join Over 1 Million Premium Members And Get More In-Depth Stock Guidance and Research
By Maurie Backman – May 27, 2018 at 6:18AM

Will you end up making it too?

There's nothing like wedding season to send your spending into overdrive -- especially if you're the one getting married. The average U.S. wedding now costs a whopping $33,391, according to data from The Knot, and while many couples will no doubt manage to pull off their weddings at a much lower price tag, there are plenty who will inevitably exceed that threshold.

But regardless of how much you're planning to spend on your wedding, don't make the one mistake that could ruin your finances for years on end: racking up debt. Unfortunately, 74% of couples who are planning to wed by the end of the year expect to take on debt to pay for their weddings, according to a Student Loan Hero study. And that's a move they'll probably come to regret. 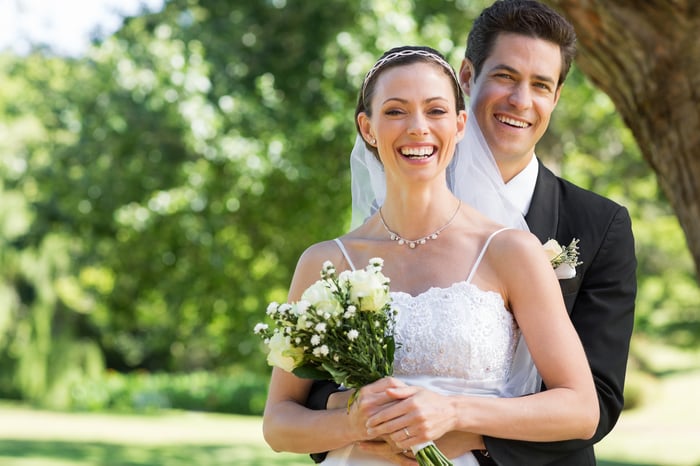 Avoid debt at all costs

What's the problem with taking on debt? For one thing, debt will make an already costly affair even more expensive. That's because carrying a balance for an extended period of time (which is likely to happen if you're talking about financing a wedding) will cause you to rack up loads of interest, thereby adding to your total cost.

Another problem with taking on debt to pay for your wedding is that it could bring down your credit score, thus making it harder for you to rent a home, get a mortgage, finance a car, or do many of the things functional adults tend to do. A high credit card balance can raise your credit utilization ratio, which is a measure of how much of your available credit you're actually using. Once that ratio exceeds 30%, it can hurt your score. But if you have a total line of credit of $20,000, and you're carrying a $15,000 balance from your wedding, your ratio will probably get stuck in unfavorable territory for several years.

But those aren't the only issues you'll contend with if you take on debt to pay for a wedding; you'll also miss out on key opportunities to build wealth early on in your marriage. The more money you're on the hook for each month in the form of a debt payment, the longer it'll take for you to reach other financial goals you might have, like building an emergency fund, buying a home, or saving for retirement. And that's a good way to add a layer of stress when you're first starting a life together.

It's all about priorities

Tempting as it may be to spring for the seven-piece band and elegant floral centerpieces, if you're on a limited budget for your wedding, work with what you've got. Decide which elements of the big day are most important to you, and scale back in other areas that aren't as pressing.

Furthermore, resist the urge to throw an over-the-top bash just because your friends are doing so. Maybe they have rich parents or don't care about starting their marriage deep in a financial hole. But their choices don't have to dictate your decisions.

Interestingly enough, in the aforementioned survey, men were more likely to feel pressured to have a big wedding than women. If you don't want your wedding -- or rather, its cost -- to become a point of contention, sit down with your partner, map out a budget, and figure out how much you can afford to spend without resorting to drastic measures. And then decide that you're going to be OK with the wedding that number buys you.

Remember, though your wedding is an important milestone, it's only one of many you'll experience as a couple. And there's no sense in sacrificing your future when you can pull it off for less.