Please ensure Javascript is enabled for purposes of website accessibility
Log In Help Join The Motley Fool
Free Article Join Over 1 Million Premium Members And Get More In-Depth Stock Guidance and Research
By Maurie Backman - May 31, 2018 at 6:04AM

Americans are living longer these days, and as a result, many are working longer as well. In fact, 16% of employees today think they'll keep working until age 75 or beyond. But impressive as that may be, there are some folks who plan to effectively keep working for the rest of their lives.

It's not a bad idea. Retirement has been shown to increase the likelihood of clinical depression by 40%, as, for one thing, having nothing to do with one's time can lead to feelings of worthlessness. Plugging away at a job, on the other hand, can help seniors maintain a more positive outlook and feel better about themselves. And from an economic perspective, working indefinitely means not having to worry about running out of money -- something 60% of baby boomers today fear more than death. 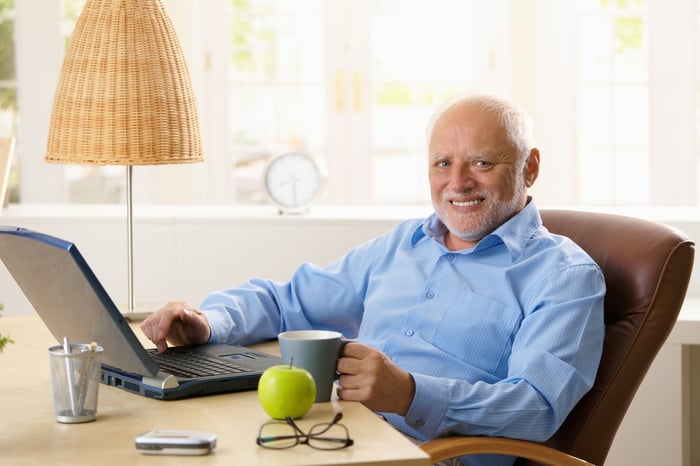 If you're planning to work for the rest of your life, you may be thinking you don't need to concern yourself with building a nest egg, since, conceivably, you'll have a perpetual stream of income to look forward to until you die. But while there's nothing wrong with planning to never retire, not saving for the future is a move that could come back to haunt you at the worst possible time in your life.

You still need that nest egg

The purpose of building a nest egg, whether in an IRA or 401(k), is to ensure that you're able to cover the bills once your steady paycheck goes away. But if your plan is to keep collecting that paycheck, it's easy to see why you'd think you don't need savings.

Here's the reality though: An estimated 60% of workers wind up retiring earlier than expected, and the reasons run the gamut from personal health issues to layoffs to needing to care for loved ones. Therefore, while you might plan on working for the rest of your life, the universe might throw a wrench in the works. And if you're not prepared financially, you may come to struggle during your golden years, especially since Social Security won't provide enough income for you to live on.

Of course, if your goal is to keep collecting a paycheck as you age, you don't necessarily need to push yourself to hit these limits year after year. But you will need to save something.

The good news? If you contribute to a retirement plan steadily over time, you'll establish some nice savings without having to make too many sacrifices along the way. Case in point: Setting aside just $300 a month over a 35-year period will give you nearly $500,000 if your investments generate an average annual 7% return during that time (which is more than doable with stocks). And that's a good way to buy yourself some financial security in the event your long-term plans get upended.

Better to be safe than sorry

Though never retiring is a good idea in theory, it may not be feasible. If your company folds when you're 75, for example, what are your chances of finding another firm to hire you at that stage of life? Furthermore, even if you're perfectly healthy today, our bodies tend to work against us as we age, and if you find that you hit a wall in, say, your late 70s or early 80s, you'll want the option to call it quits. Having a nest egg is the one thing that will buy you that choice, as well as protect against the unknown. And that's reason enough to build one, even if you do end up working for the rest of your life.