If there's one aspect of retirement that's universally daunting, it's the notion of running out of money. But unfortunately, it's a very real risk for the countless Americans who enter retirement financially unprepared year after year.

If you're approaching retirement with inadequate savings, there are several ways you can compensate to avoid depleting your nest egg prematurely. You might, for example, decide to work part-time as a senior to generate income, thereby leaving more of your nest egg intact. But here's another option you might consider: downsizing. An estimated 42% of Americans plan to downsize in retirement, according to data from TD Ameritrade, and it's a move that could end up spelling the difference between struggling financially and having enough cash to cover the bills for the rest of your life. 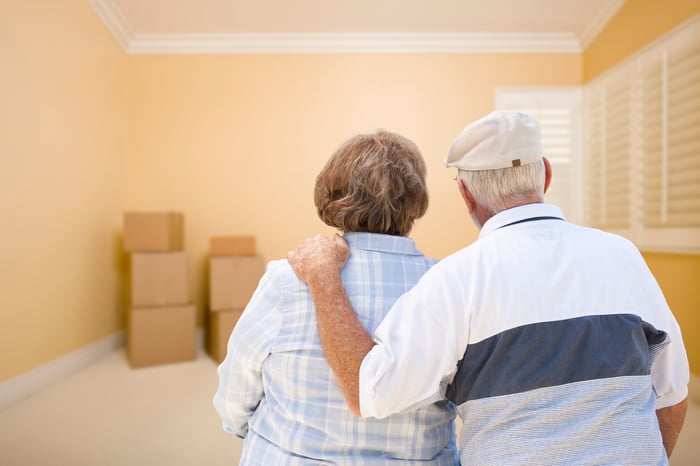 Why downsize in retirement?

Even if you own your home outright by the time you retire, downsizing to a smaller space can still save you a bundle. Remember, other than healthcare, housing will likely be your single greatest monthly expense as a senior, so reducing it as much as possible could work wonders for your budget.

For one thing, it costs less money to heat and cool a smaller space than a larger one. If you're used to spending $250 a month on utilizes for a 2,000-square-foot home, downsizing to 1,000 square feet won't necessarily cut that bill in half -- but you might reduce it by a third, which will help.

Furthermore, it stands to reason that maintaining a smaller space is easier and more cost-effective than maintaining a larger one. The typical homeowner spends 1% to 4% of his or her property's value on upkeep per year, but if you downsize from a $300,000 home to a $150,000 home, you might see your maintenance costs shrink as a result.

Another thing to keep in mind is that if you're looking to stay in the same area but downsize to a smaller space, your property taxes are likely to go down as well. Property taxes are a function of your home's value times your local tax rate, so if you're dealing with a space that's smaller and therefore less valuable, you'll pay less for the privilege of living there. And since property taxes are no longer fully deductible (they're part of the SALT deduction, which was once unlimited but is now capped at $10,000), lowering that bill makes sense on multiple levels -- particularly if you're living in a state whose property taxes are much higher than average.

Finally, remember that by the time you retire, there's a good chance your adult children will have moved out, which means you like won't need all of that space. And that's reason enough to swap your current home for a smaller one that's easier to deal with in all regards.

A wise alternative to downsizing

If you're unable or unwilling to downsize in retirement -- say, you can't find a smaller home in your neighborhood and really want to stay there -- then your next best bet is to turn your property into an income source to help offset some of its costs. You could try renting out a portion of your home on a full-time basis if you have a separate finished area, like a basement or garage. If you don't want a permanent tenant, see about renting out your home seasonably. This works if you live near a major attraction, whether it's a ski resort, theme park, or beach, and are willing to have guests on weekends. And, if you rent out your home for 14 days or less during a given year, you can collect that rental income tax-free.

There's a good chance your home will come to monopolize a large chunk of your limited retirement income, so if your nest egg isn't as robust as you'd like it to be, downsizing is a smart move that could alleviate some financial stress when you're older. And while it's never easy saying goodbye to a home you've come to love, remember that there's always the option to create new memories in a property that doesn't strain your budget.