If there's one cost associated with raising children that has parents throwing their hands up in defeat, it's college. In recent years, tuition costs have continued to climb, and at the rate they're going, the average four-year private education could hit $303,000 by 2036. Yowza. But while saving for college might seem insurmountable, the reality is that if you go about it wisely, you can make a major dent in those eventual tuition bills. Just be sure to avoid these two glaring mistakes along the way, because they could end up derailing your efforts and causing you -- or your kids -- to take on a mountain of student debt.

Mistake No. 1: Not starting to save as soon as your children are born

Many workers put off retirement savings for the first decade or so of their careers, thinking they'll catch up later when their earnings increase. And plenty, in fact, do catch up. You can't, however, adopt that same strategy when you're talking about college because you only have a limited savings window to begin with. 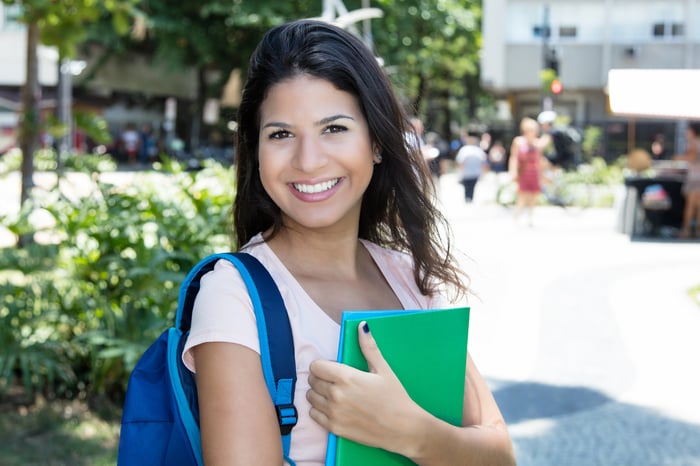 In fact, one of the biggest mistakes you can make when it comes to college is not saving as soon as your children are born. Doing so should, in theory, give you a good 18 years to work with, and that's just enough time to let the power of compounding work its magic. But for each year you delay, you lose out on critical growth that could cause your savings to fall short.

Imagine you start setting aside $300 a month for college when your child turns four and that same child starts college at 18. If your investments generate an average annual 7% return during that time, you'll end up with $81,000. If you were to start saving that same amount of money four years earlier, though, you'd have $122,000 to work with instead, and that could spell the difference between needing to take out loans or not.

Of course, student loans aren't the end of the world, provided they're taken out in moderation. The point, however, is that the sooner you start saving, the better off you'll be.

Mistake No. 2: Housing your college fund in a regular savings account

You work hard to save money for college, so the last thing you want to do is risk losing some of that principal in exchange for a place to house it. Now if you open a 529 plan, you'll technically be taking that risk -- but you'll also have a much greater chance of meeting your ultimate savings goals.

Another major mistake on the road to college savings is keeping your money tucked safely in the bank. Sure, you won't risk losing any of it, but you'll stunt its growth tremendously. Worse yet, you won't get any tax benefits by keeping your college fund in savings. Rather, you'll pay taxes year after year on what little interest your money earns.

In the above example, we saw that a monthly contribution of $300 to a college fund could turn into $122,000 over an 18-year period, but that assumes a (reasonable) 7% return on investment and no taxes on gains year after year, both of which you can get with a 529. A savings account, by contrast, will pay you 1% interest a year if you're lucky, which means that if you were to go that route, you'd end up with $70,000 over 18 years without taking taxes into account. Once we factor in taxes, you're actually looking at a lot less. And that's why it pays to house your college savings in a 529 -- for the tax advantage and potential growth.

If you're not big on 529s -- especially since you'll be penalized on gains removed for noneducation purposes -- another savings option to look into is a Roth IRA. With a Roth IRA, you get the same tax-free growth as a 529 but with more flexibility on how you use your money. If you wind up with an excess amount of cash (say, your child gets a huge scholarship), you can always reserve it for retirement without getting penalized along the way.

The only drawback of a Roth IRA is that you're currently limited to an annual contribution of $5,500 if you're under 50, or $6,500 if you're 50 or older, so if you're planning to save more than that, you'll need an overflow account. Furthermore, higher earners can't open a Roth directly, though there's always the option to fund a traditional IRA and convert it to a Roth later on. The key is to choose an account that offers some sort of tax benefit as well as an opportunity for growth.

Saving for college is no easy feat, so don't make an already-daunting task all the more difficult. Avoid these mistakes, and with any luck, you'll manage to cover your kids' college costs, no matter what they end up being.