One of the biggest challenges in saving for retirement is that it can be hard to know what your living expenses will look like during your golden years. While you might assume that your monthly bills will drop substantially once you stop working, the reality is that you may not see all that much of a difference from what you used to spend.

In fact, only 50% of current retirees say their spending has gone down since they ended their careers, according to the new MassMutual Retirement Income Study. Meanwhile, 41% of retirees are spending the same amount they did while working, and 8% are spending more.

Now to be fair, the retirees surveyed here had investable assets of at least $100,000, were retired from a private sector job, and were participants in their employers' defined contribution plan at the time they retired. In other words, the aforementioned spenders were part of a pretty specific subset, and don't necessarily represent retirees on a whole. Still, there are many seniors whose backgrounds read similarly -- they have a respectable level of assets, worked for private companies, and saved in those companies' plans.

Furthermore, this isn't the first set of data to indicate that spending doesn't universally drop in retirement. In a separate study by the Employee Benefit Research Institute (EBRI), roughly 46% of households saw their spending increase during the first two years of retirement. And so while your personal circumstances might differ from those surveyed by MassMutual or the EBRI, this should still trigger a wakeup call: If you want to retire comfortably, prepare for the fact that your spending may not drop all that much -- and save accordingly. 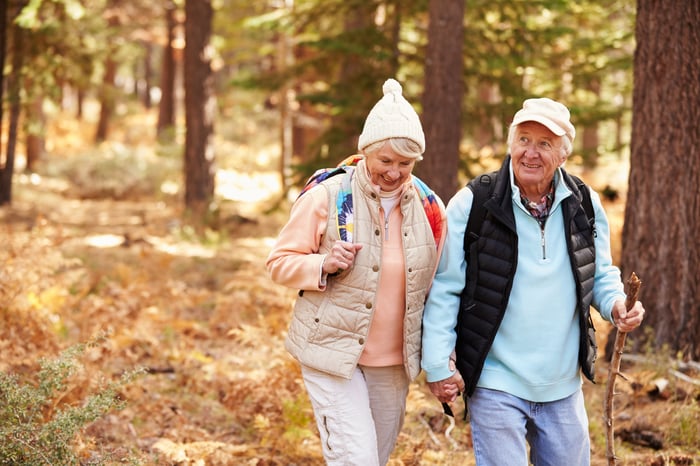 Why your spending may not go down in retirement

You may be wondering how it can be that your spending won't drop once you stop working. The reality, however, is that many of the common expenses workers face don't go away in retirement. Take housing, for example. You still need a roof over your head, and if your mortgage isn't paid off by the time you retire, you won't see that expense drop in the slightest. (It might, in fact, go up as a result of your property aging and needing more maintenance.)

Similarly, while your commuting costs will disappear when you stop having a job to go to, you'll still to get around town, which is likely to mean keeping insurance and maintenance on your vehicle, and possibly a car payment, too. And if you drive around a lot to get to sources of entertainment, you may find that you're filling your gas tank more often, even without a daily commute.

In fact, let's talk about entertainment, because come retirement, you're going to have a lot more free time on your hands, and you'll most likely spend money keeping busy -- perhaps more money than you spent on leisure before. Throw in the fact that your healthcare costs are likely to climb, and it's pretty clear that you should base your savings targets on the idea that your overall spending isn't likely to decline much.

And that's why you need to save as aggressively as possible during your career. Though Social Security will help pay the bills in retirement, it won't be enough to sustain you without a solid chunk of savings. As the Social Security Administration itself notes, the program only replaces about 40% of the average beneficiary's pre-retirement income. The greater a nest egg you build to supplement that, the less financial stress you'll face when you're older.

If your retirement savings efforts thus far had been based around the idea that your lifestyle would naturally be more frugal in retirement, let this serve as a wake-up call that your golden years could end up being more expensive than you previously imagined. The good news, however, is that if you have a number of working years ahead of you, you can ramp up your savings efforts and come away with a pretty solid nest egg.

Imagine you're 50 years old with the goal of retiring at 67, and you have $200,000 saved to date. If you manage to max out your 401(k) for the next 17 years, which means socking away $24,500 annually based on the current limits, you'll wind up with almost $1.39 million if your investments generate an average annual 7% return, which is more than feasible if your portfolio leans heavily toward stocks. And that's a nice sum to work with.

If you don't have a ton of time between now and retirement and can't really boost your nest egg, you may need to balance your budget by continuing to work part-time in retirement. Doing so won't just generate cash, but also prevent you from spending money to occupy a portion of your days.

No matter what preparations you're making for your golden years, don't make the mistake of assuming your expenses will magically go down. They might drop -- but they might not. If you plan for the latter situation, you'll put yourself in a better position to cover your bills without stress.