With college costs continuing to climb, student debt remains a major source of stress for countless individuals who have no choice but to finance their education. But the problem might be worse than we thought. The U.S. Federal Reserve reports that outstanding student debt has reached an all-time high of $1.52 trillion. That's a 145% increase from the level it was at 10 years ago.

In fact, Americans owe more money in student loans than they do credit cards and auto loans. And while student debt is perhaps a healthier sort of debt than the former (particularly credit cards), it's also an obligation that's tough to shake. 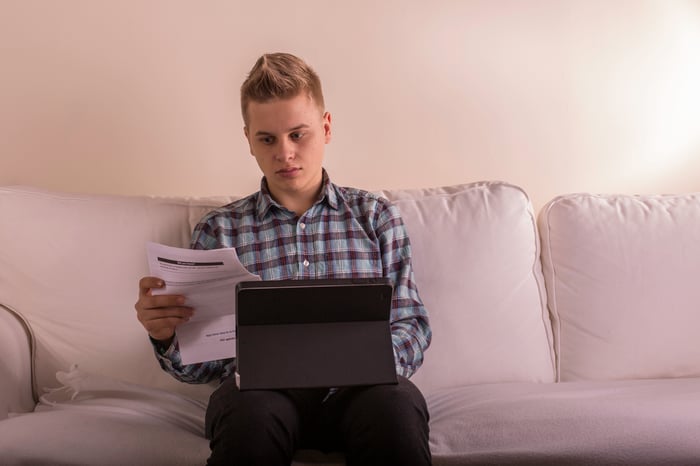 If you'd rather not join the ranks of the countless Americans who are drowning in student debt, there are steps you can take to keep your loans to a minimum. Here are a few to strongly consider.

1. Stick to an in-state school

Tempting as it might be to attend a big-name college with a stellar reputation, you'll often get much more bang for your buck at an in-state public school. Not only that, but you'll save a bundle on tuition and fees, thereby limiting the amount you need to borrow in pursuit of your degree.

Here's a breakdown of the average cost of tuition by college type for the 2017–2018 academic year:

As you can see, opting for an in-state public university over a private one might save you roughly $99,000 on tuition alone over a four-year period. And that's reason enough to stay relatively local.

Students whose college costs exceed the federal borrowing limits often resort to private loans to make up the difference. But there's a danger in borrowing privately. For one thing, the interest rate on private loans isn't capped the same way it is on federal loans. As such, you could end up paying the same interest on your student loans as you would a credit card, thereby adding to your total costs.

Another problem with private loans is that they generally don't offer any sort of accommodations for folks who struggle to keep up with their payments. Federal loans, on the other hand, offer a number of borrower protections like income-based repayment plans and deferment.

If you can't get enough funding in federal loans to cover your educational expenses in full, it pays to consider working part time to cover the difference or even taking a semester off to work and bank some tuition money. Many universities offer work–study programs that set you up with on-campus jobs, thereby making it possible to work even if you don't have access to a vehicle.

Another great way to keep your borrowing to a minimum is to complete your degree in fewer semesters. But to pull that off, you'll generally need to go in with a solid idea of what it is you want to major in. If you're able to pinpoint a major early on, loading up on extra credits over the course of three or three and a half years will leave you much less in the hole than if you were to require four full years of studies or more.

Maybe you've been dreaming of living in a dorm during college and bonding with a new set of roommates. But before you get too set on that fantasy, remember that living in a dorm will add $10,800 a year, on average, to your college costs if you're attending a public university or $12,210 a year if you're attending a private one. A better bet? Live at home, save that money, and commute to and from school. While you might miss out on the dorm experience in the near term, you'll be thankful you did when your outstanding loan balance is $40,000 or more less than what your peers owe.

More than half of student loan borrowers wind up owing at least $20,000 upon finishing their studies. If you'd rather keep your debt to a minimum, make smart choices about where you study and how you go about completing your degree. With any luck, you won't end up drowning in debt like so many graduates unfortunately do.