Social Security plays a key role in the financial security of American workers and their families. More than 60 million people receive Social Security benefits, and more than half of all retired workers who get Social Security count on it for the majority of their income during their retired years.

As you plan for your own retirement, it's useful to know what Social Security is likely to pay. Although your own work history plays a key role in determining exactly how much you'll get from Social Security, the following average figures from the Social Security Administration serve as a useful starting point to put you in the right ballpark. 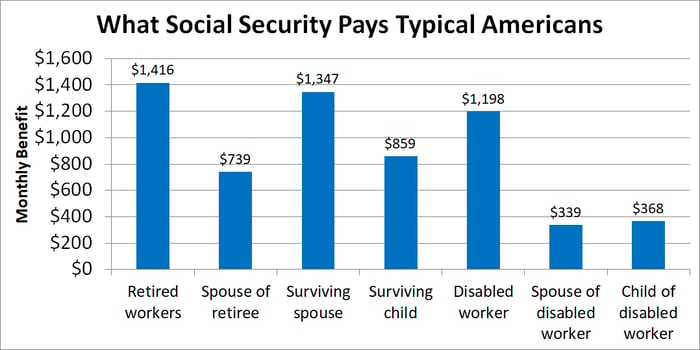 One thing to remember is that Social Security was never meant to be the sole source of financial support for workers after they retired. Although the amounts that Social Security typically pays are significant and helpful, they're not usually enough by themselves to cover all the living expenses that the average American has to pay in retirement.

However, you can also see the role that Social Security plays in protecting families from financial ruin after tragic events. Survivor benefits for spouses and children are essential in supporting families after a worker's death, and disability benefits provide income when an illness or injury stops a worker from being able to earn a living.

Social Security's payouts won't support a lavish lifestyle, but they're valuable assets in your retirement planning. Add in your own savings, and you'll be well on your way toward a comfortable retirement.

A Foolish Take: How Much Does Social Security Pay? @themotleyfool #stocks Next Article
Current