It takes money to retire early, and if you don't save accordingly, you won't get there.

Many folks dream of retiring early, but achieving that goal is easier said than done. While 50% of Americans would like to retire by age 60, only 33% expect to do so, according to a new survey by TD Ameritrade.The reason is that most folks don't have enough savings to pull the trigger that young, and as such, they're likely to find that they end up working longer than desired.

The challenges of retiring early

Retiring before the age of 62 means not being eligible to collect Social Security, and while those benefits alone aren't enough to live on, they certainly help millions of seniors pay their bills. Even retiring at 62 puts seniors at a financial disadvantage. Those who claim Social Security at that age risk lowering their benefits for life, since filing before full retirement age (66, 67, or somewhere in between, depending on year of birth) results in an automatic reduction in monthly payments. 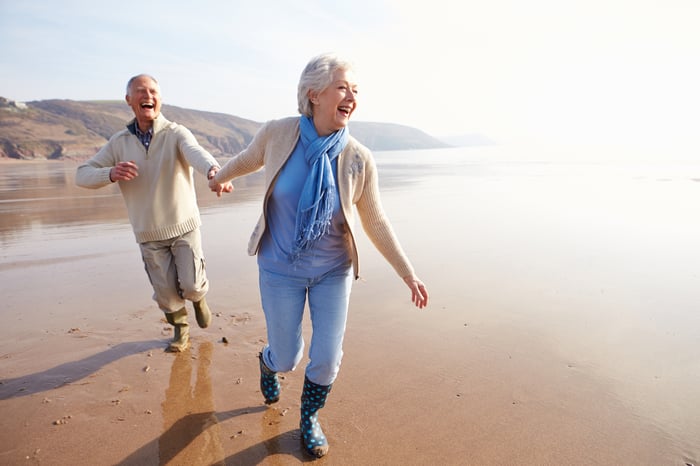 Furthermore, retiring before the age of 65 means not getting health coverage under Medicare. And while Medicare doesn't spell free healthcare for seniors, it certainly helps defray many of the costs retirees would otherwise face.

That's why early retirement often hinges on strong savings -- to make up for a lack of Social Security and the cost of complete out-of-pocket health coverage. And while building a strong nest egg takes time and effort, it's something all of us have the ability to do if we make it a priority.

There's no single magic number that guarantees you'll have enough money to pay your bills, but as a general rule, you should aim to replace as much as 80% of your pre-retirement income to ensure that you're able to live comfortably. This means that if you're used to earning $80,000 a year, you'll want $64,000 a year once you stop working. At some point, some of that can come from Social Security, but if you're planning to retire at age 60, you'll have at least two years where that isn't an option.

On the other hand, if you save well during your career and invest your savings wisely, there's a good chance you'll accumulate enough cash to make an early retirement happen. Check out the following table, which shows what sort of nest egg you stand to amass based on your total savings window:

As you can see, saving from a young age is crucial if your goal is to exit the workforce ahead of your peers. At the same time, you'll need to set a nice chunk of cash aside each month and invest it in a reasonably aggressive fashion. In this example, we're talking about saving $9,600 a year, or 12% of the $80,000 salary we're working with. But if you're able to set aside 15% to 20% of your earnings, you'll accumulate even more wealth.

Furthermore, the 7% average return referenced above assumes a stock-heavy portfolio (that 7% is actually a couple of percentage points below the stock market's average). But if you play it too safe, you'll stunt your savings' growth, thereby making early retirement less feasible.

For the average retirement, you can expect to withdraw about 4% of your nest egg's value each year without having to worry about running out of money prematurely. If you're retiring a bit early, however, you're better off sticking with a slightly more conservative withdrawal rate -- say, 3.5%. But if that's the case, under the first scenario above, you'd have access to about $46,500. That's less than the $64,000 we're aiming for, but if you're willing to work part-time for a few years or cut back on expenses until Social Security kicks in, you can probably make it work.

It's possible to retire at 60 if you start saving for it at the start of your career. On the other hand, if you wait too long to start building your nest egg, you might struggle to retire on time, let alone early.