One question that inevitably comes up for many parents is whether they should hold off, or cut back, on saving for their retirement so they can help fund their kids' education. It is, of course, a personal decision that involves much more than just financial facts and figures.

But for most Americans, the answer is that no, you shouldn't forgo putting money into your retirement -- or worse, taking it out of your retirement account -- to cover tuition. This isn't a good idea for most people because one-third of Americans have less than $5,000 saved for retirement, and 21% have nothing saved.

Those are some scary figures to think about, leading us to the two main reasons why you should consider saving for retirement before your kids' college tuition. 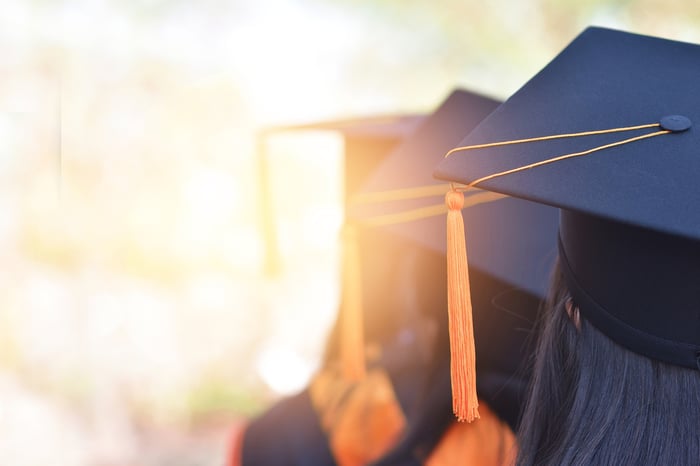 Reason 1: You need money for retirement

This one's a no-brainer, but if you're stealing from your own retirement account to support your kids' college education, you need to understand that you will need retirement income to live off.

At some point, you likely won't be able to work and will be dependent on the retirement savings you've accumulated. Healthcare expenses, food, housing, and inflation will eat into your savings each year. With many Americans living into their 90s these days, there could be a lot of years that you need to cover these costs.

If you're putting off saving for retirement so that you can save or pay for your child's education, you could be putting yourself in a precarious financial position years down the road. Consider that the average retired household spends about $46,000 each year and that Social Security recipients receive, on average, less than $17,000 per year right now. This leaves a gap of nearly $30,000 per year in expenses that's not being covered by Social Security.

Thus, putting money away for your child's education at the cost of your own retirement will not only make it difficult to pay your bills later, but could end up being a financial burden on your kids.

Reason 2: There are options that don't put your retirement at risk

I'm a parent, and I love helping my kids and giving them what they need, but being a good parent doesn't mean I have to be responsible for paying for an expensive college education. There are plenty of inexpensive two- and four-year college programs that they'll be able to pursue when the time comes. If that's not what they want, then there will be scholarships they can apply for or jobs that they can get to help pay for their education.

Consider that the average cost for one year of public, in-state tuition, housing, and fees is $25,290. Attending a private university in 2018 doubles that amount to $50,900. Not everyone pays this much, while others pay more. But it doesn't have to be this expensive.

When it comes time for college, some people should consider the variety of two-year degrees that can meet many people's educational goals -- without the huge expense. Or, if a four-year degree is a must, then consider helping your child out by letting them live at home while they attend in-state school, instead of paying tens of thousands of dollars each year for their housing.

Going the cheaper route will not only help your child avoid the growing student debt problem that plagues many Americans, but it will also help keep you from spending the retirement money you'll need later.

Not paying for your kids' college tuition doesn't mean that parents have to financially cut their children off once they finish high school. But instead of footing the tuition bill at the expense of your own retirement, instead consider how your child can help pay for their education on their own. This will not only give you a better chance at setting aside money for your retirement, but it will also give your kids some ownership over their own financial life.

Of course, if you have enough money saved to cover the cost of tuition, there's nothing wrong with paying for it. But if you're struggling to save for your own retirement right now, then that's a good indication that paying the tuition bill is the wrong move.