Please ensure Javascript is enabled for purposes of website accessibility
Log In Help Join The Motley Fool
Free Article Join Over 1 Million Premium Members And Get More In-Depth Stock Guidance and Research
By Maurie Backman - May 13, 2018 at 8:48AM

It's an alarmingly small number.

We're told of the importance of saving for retirement, especially given the way healthcare and other senior living costs continue to rise. But apparently, a large number of workers aren't listening. In fact, one-third of Americans have less than $5,000 set aside for the future, according to new data from Northwestern Mutual. Incidentally, 21% of Americans have no retirement savings at all.

It's one thing to have less than $5,000 in your nest egg when you're only in your 20s or even 30s. But if you've been in the workforce for quite some time, that $5,000 doesn't paint a great picture. And if you don't take steps to ramp up, you'll be sorry for it later on. 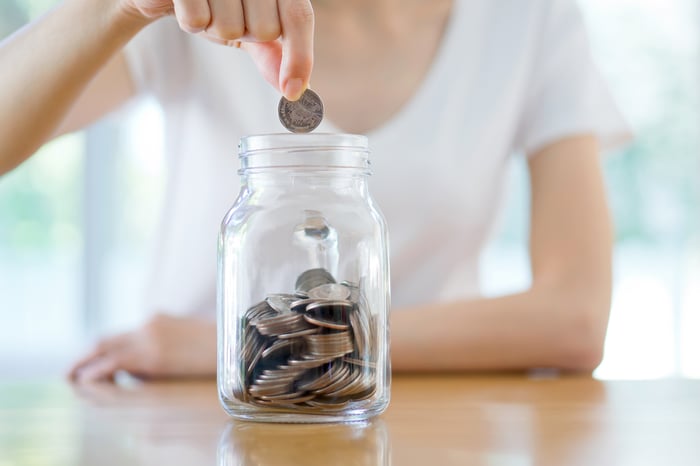 Many workers don't save for the future because they assume they can live on Social Security. But that's a dangerous, misguided assumption. In a best-case scenario, Social Security will replace about 40% of the average earner's pre-retirement income. Most seniors, however, need double that amount to live comfortably.

Even if you're willing to cut corners in retirement, you can only slash so many basics. You'll still need a roof over your head, a way of getting around town, and food on the table. Therefore, a frugal lifestyle might allow you to get away with spending a bit less than 80% of your former earnings, but not much. That means that while your Social Security income will help cover the bills when you're older, you still will need a nice amount of savings to avoid falling short.

It's not just an overreliance on Social Security that causes so many workers to neglect their savings. For many, it's a matter of misplaced priorities. Most adults would rather spend their paychecks on living expenses and luxuries than part with a portion of their income to save for the future. But people who don't are taking the risk of struggling financially in retirement.

If you've been having a hard time setting money aside because your bills monopolize your entire paycheck, there are a few things you can do to eke out some savings. First, examine your budget (or create one if you're not following one already) and identify at least a few non-essential costs you can cut. That could mean canceling your gym membership, downgrading your cable plan, or eliminating restaurant meals, which cost far more than cooking at home.

Additionally, consider working a side hustle if your regular salary really doesn't allow for much savings. Putting in just a few hours a week of additional work could spell the difference between building a nest egg and entering retirement with absolutely no money to your name.

Finally, make a point of saving your raises year after year, as well as any bonus cash that comes your way. If your salary increases by $2,000 a year, on average, from which you take home $1,400 after taxes, and your living costs only rise by $400 simultaneously, there's no reason not to put that extra $1,000 into your IRA or 401(k).

A little bit of saving can go a long way

If you've been discouraged from saving thus far because you can't get anywhere close to maxing out your IRA or 401(k), don't be: You can establish a healthy nest egg by setting aside just a few hundred dollars a month -- that is, if you give yourself a long enough savings window. The following table further illustrates this point:

Finally, if you're at a point in your career where retirement is really looming and you have nothing saved to date, don't give up on building that nest egg. Workers 50 and over can contribute up to $24,500 a year to a 401(k) and $6,500 a year to an IRA. Hit either limit for the last half-decade of your career and you'll be in much better shape for retirement than a $5,000 nest egg will allow.

Remember, Social Security will only get you so far in retirement; it's on you to come up with the remaining income you'll need. Do your best to save for the remainder of your career, no matter how long that is, and you'll be thankful for it in the long run.