It sounds like a lot of money, but it may not go as far as you think.

Think, for a moment, about what you could buy with $1 million: Your dream house, the fanciest sports car on the market, or a few dozen luxurious trips around the world.

While $1 million will go a long way in most areas of life, it may not be enough to get you through retirement -- even if you're not yachting through the Caribbean or living in a 10-bedroom mansion. 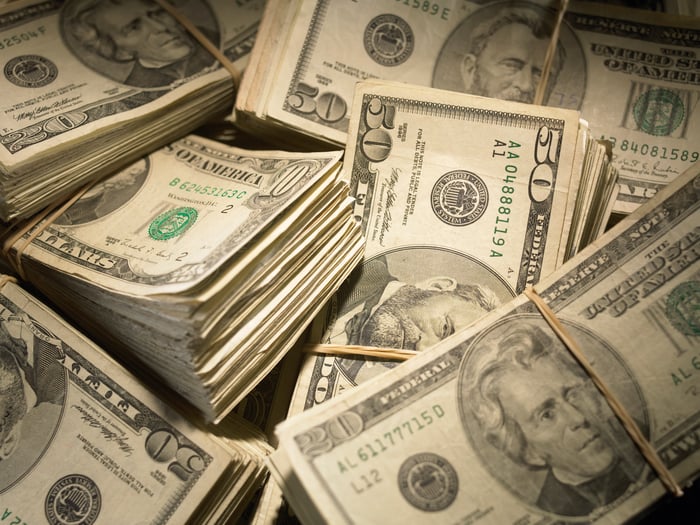 The problem is that $1 million is still a common savings goal for many workers, who assume that much money will undoubtedly be enough to last 20 or 30 years. However, $1 million doesn't go as far as it used to, and when you consider skyrocketing healthcare costs and inflation, it will be worth even less by the time you're ready to retire. That means it's important to figure out how much you'll really need to retire comfortably, rather than aiming for a big, round number.

How far will $1 million really go?

One of the biggest challenges of saving for retirement is accumulating enough money to cover rising healthcare costs and combat the wealth-eroding effects of inflation.

The average 65-year-old couple retiring now can expect to spend roughly $280,000 on healthcare alone during retirement, according to Fidelity Investments. That's a 75% increase from when Fidelity first started conducting the study back in 2002. If healthcare costs continue to increase at that rate, you can expect to pay nearly half a million dollars in healthcare expenses alone during if you retire at age 65 in 2034.

Inflation also can take a bite out of your investments, especially if you're still a few decades away from retirement. For example, say you're 40 years old and are on track to save $1 million by the time you turn 65 in 2043. Assuming an inflation rate of 3% per year, in 2043 the equivalent to $1 million in 2018 dollars will be $2.1 million. In other words, the same goods and services will cost around twice as much by the time you retire. That also means that if you have $1 million in savings at age 65, it will only go half as far as you originally expected.

Furthermore, say you spend 20 years in retirement. That $1 million in 2018 dollars will be equivalent $3.8 million by 2063, again assuming a 3% annual inflation rate. In other words, while $1 million may seem like a lot now, in 45 years, everything could be around four times as expensive -- and your retirement fund will need to keep up.

Determining how much you'll really need to retire

Although it may seem daunting to figure out how much you'll need to have saved by retirement (especially if it's more than $1 million), taking it one step at a time makes it much less overwhelming. To start, calculate roughly how much money you'll need each year to get by.

To do this, begin with a budget. Keep in mind that your retirement budget may be slightly different from your pre-retirement budget -- you may not have commuting costs, for example, but you could be spending more on hobbies or travel. It doesn't have to be exact, but try your best to come up with an accurate picture of how much you'll need each year.

Then, multiply that number by 25 to estimate how much you'll need to save in total based on what you'll need each year. So if you've determined that you'll need about $50,000 each year during retirement, multiply that by 25, and you'll need roughly $1.25 million to comfortably retire. Keep in mind that that number is in today's dollars. If you're, say, 20 years away from retirement and we assume an inflation rate of 3% per year, that $1.25 million will be worth around $2.25 million in 2038 -- meaning that's how much you'll actually need to have saved in 20 years. That being said, it's much easier to calculate all your numbers in today's dollars and then, as a last step, convert them to inflation-adjusted future dollars to see how much you'll actually need.

The "multiply by 25" rule is based on the 4% rule, which states that you can withdraw 4% of your nest egg during the first year of retirement and then adjust that number each subsequent year to account for inflation. So if you have $1.25 million saved by the time you retire, 4% of that amounts to $50,000. Then, if you increase your withdrawal by 3% the next year for inflation, you'd withdraw $51,500, and so on.

Keep in mind that these are just guidelines -- not hard-and-fast rules. You may need more or less money depending on your unique situation (for instance, if you'll require long-term care in the future). But this a good way to get started and at least put yourself in the ballpark.

What if you can't save that much?

As it is, hearing that it will likely take more than $1 million to retire comfortably can be discouraging if you're struggling to save. And if you're having a hard time socking money away for retirement, you're not alone -- a third of Americans have nothing at all saved for retirement, according to a survey from GOBankingRates, and more than half (56%) have less than $10,000 saved.

Even if you can't save $1 million (or more) by the time you retire, that doesn't mean you shouldn't save as much as you can during the time you have left. It's never too late to get started, and you can still save thousands (or hundreds of thousands) of dollars if you're strategic and aggressive.

First, if your employer offers matching 401(k) contributions, make sure you contribute at least enough money to receive the full match -- otherwise, you're leaving free money on the table. Second, consider delaying Social Security benefits by a few years to earn larger checks. While you can start claiming benefits as early as 62, for each month you wait past that age (until you reach age 70), you'll receive slightly bigger checks. And if you also continue to work during those years, that will give you more time to save as well. Even small changes can amount to significant gains over time, and doing anything is better than doing nothing.

While it's nowhere near $1 million, it's certainly better than nothing. And if your full retirement age is, say, 66 years old, you could receive a 32% boost in your Social Security benefits by waiting until age 70 to claim them. If your full benefit amount (or the amount you're theoretically entitled to if you claim when you reach your full retirement age) is $1,300, for example, that means you'd be receiving checks worth $1,716 each month by waiting until age 70 to file -- which can go a long way if your personal savings are falling a bit short.

It can be daunting to save for retirement with everyday expenses and inflation working against you, but it's far from impossible. Even if you can't reach the lofty goal of saving more than $1 million, the most important thing you can do is start saving whatever you can immediately.