Few government programs are as important to as many Americans as Social Security. With tens of millions of people getting retirement, disability, and family benefits from the program, the federal government pays out just about $1 trillion in benefits each year.

The money for those benefits has to come from somewhere, and most of it gets taken out of paychecks in the form of Social Security payroll taxes. Most workers pay 6.2% of their pay in taxes to Social Security, and their employers pay a matching 6.2% amount out of their own pockets. That rate hasn't changed for nearly 30 years. But the amount of earnings on which the tax applies has risen steadily over the years, and as the Social Security Administration just announced, 2019 will see a big potential rise in the maximum Social Security tax possible. 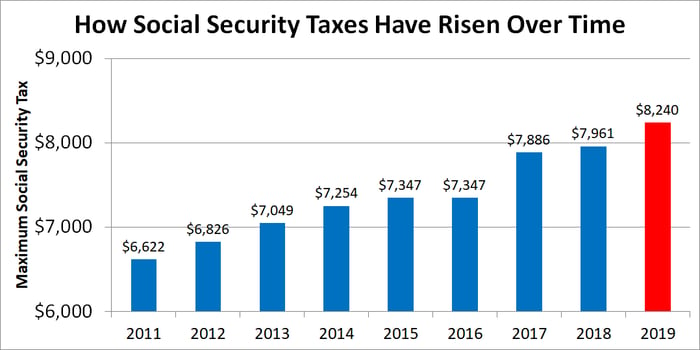 Some taxpayers will see as much as a $279 jump in the amount of tax they have to pay. The change stems from the fact that the annual wage base limit on which Social Security tax gets charged rises in line with a measure of how much in wages and salaries U.S. workers earn, and that number jumped by 3.5% over the past year.

The good news is that only those who make more than $128,400 in 2019 will experience a tax increase, with the biggest boost applying to those whose earnings top the $132,900 mark. Yet even though upper-income Americans will pay a bit more, the failure of efforts from some lawmakers to eliminate the wage base limit on Social Security taxes entirely is still some consolation.

A Foolish Take: Here's Why Your Social Security Taxes Might Go Up in 2019 @themotleyfool #stocks Next Article
Current