These days, a growing number of younger Americans are delaying homeownership rather than buying early on in their careers. Though there are several factors that explain this trend -- crushing levels of student debt and a limited inventory of starter homes on the market being just two of them -- at the end of the day, only 34% of U.S. adults under 35 owned a home as of 2016. This means the remaining 66% are either getting a free ride by living with parents, or renting.

Some might argue that renting is nothing more than a glaring waste of money. When you rent a home rather than own one, you don't get an opportunity to build equity, nor do you get to enjoy the various tax breaks homeowners are entitled to. 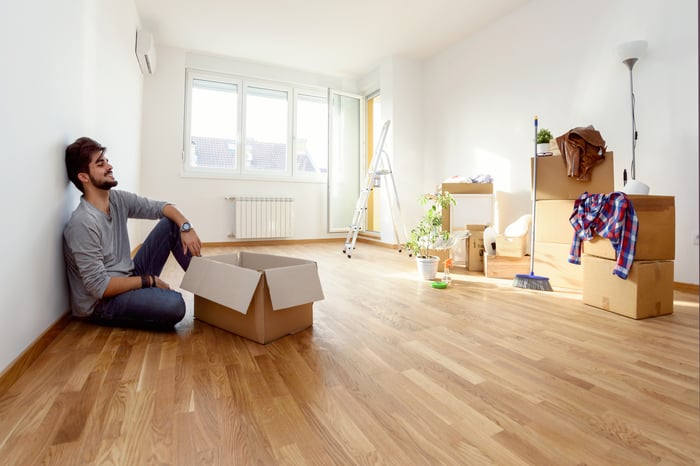 On the other hand, for those whose finances are precarious at best, renting is actually a smart move. For many younger adults, buying a home would mean diving in without a 20% down payment, thereby subjecting themselves to costly private mortgage insurance. There's also something to be said for establishing one's career and eliminating existing debt (such as that of the educational or credit card variety) before taking on new debt in the form of a mortgage.

But while renting can, in many cases, be a smart move for millennials, one thing that isn't wise is skimping on renters insurance. And that's a mistake that could really come back to bite those who feel they can do without it.

An estimated 56% of young-adult renters don't have insurance to protect themselves from property loss. And while the desire to save money on premiums might play a role in that decision, 40% of millennials who rent say they don't feel they need insurance.

The problem with forgoing renters insurance, however, is that if property of yours gets damaged in your rental unit, you won't have a financial means of recovering your losses (other than dipping into your own bank account). Contrary to what you may have heard, being a tenant doesn't automatically entitle you to coverage under your landlord's homeowners policy. This means that if a fire breaks out in your home, its associated homeowners policy should, in theory, restore the structure of that building to its former state, whether that means putting in new floors and ceilings or replacing destroyed kitchen cabinetry. But don't expect that policy to reimburse you for your lost furniture, clothing, and gadgets, because chances are, it won't.

Rather, if you want reassurance that your personal possessions will be protected in the event of damage or theft, buy yourself some renters insurance. While other types of insurance -- traditional homeowners, medical, and life -- do tend to get expensive, renters insurance is overwhelmingly affordable, with the average policy costing just $15 a month. Of course, the scope of your coverage will depend on the specific policy you obtain and its associated premium, but the point is that without insurance, you essentially risk losing everything you own when the unexpected strikes. And frankly, that's not a risk you should be willing to take.