Preparing for retirement isn't something that can be done in a day, or even a year. It takes decades of consistent saving to see results, which can sometimes be discouraging. In the age of instant gratification, it's tough to invest your money and then have to wait 10 or 20 years before you see it start to amount to significant savings.

However, while it's important to have a long-term savings plan, that doesn't mean you can't take small steps to ultimately reach your goal.

If you're struggling to save for retirement, it may help to start by tackling one small goal at a time. These money moves can all amount to significant gains over time, but they only take a few minutes to implement. 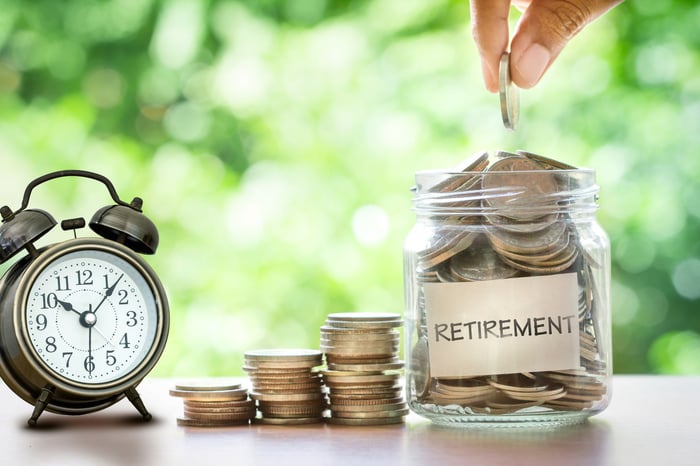 A 401(k) makes it easy to save because you can simply set a certain percentage of your salary to contribute each paycheck, and then you don't need to make the effort to set aside money for retirement. The only problem with that is it can be easy to "set it and forget it," so you're not increasing your savings rate over time.

To quickly boost how much you're saving, up your contribution rate. You don't need to be saving thousands of dollars each month to make a difference, and even increasing your savings rate by 1% or 2% can make a big difference over time.

If you really want to supercharge your savings, aim to increase your contribution rate on a regular basis. Rather than boosting your savings by 2% one time and then simply letting your investments grow untouched for 25 years, try increasing your savings by, say, 3% of your salary every five years. Using the same figures from the previous example, here's how much you'd have over time if you started saving an additional 3% of your salary every five years:

2. Cut one or two unnecessary expenses from your budget

If you're already stretched thin financially and can't find any extra money to contribute to your retirement fund, you'll need to cut back in other areas. But it can feel overwhelming (and disheartening) to think about giving up the things you love, even if you realize how important it is to save for retirement.

The good news, though, is that you don't need to make drastic cuts to your spending habits to put more money toward retirement -- trimming just one or two expenses from your budget can help get the ball rolling. Also, they don't necessarily need to be major expenses. For example, say you've decided that instead of going out to dinner twice a week, you'll cut it down to just once a week. If you spend, say, $20 on dinner, that means you'll have an extra $20 per week to save for retirement.

That may not sound like much, but it amounts to $80 per month, or $960 per year. If you're earning a 7% annual rate of return on your investments, that $960 per year can add up to over $42,000 over 20 years. Even if you're only able to scrounge up an extra $5 per week, that can amount to over $10,000 after a couple decades. No contributions are too small, and it's far better to save $5 or $10 each week than put off saving altogether because you think you don't have enough to save.

Automatic contributions make it easier to save because you don't need to remember to contribute to your 401(k) or IRA on a regular basis. Plus, when that money is automatically transferred from your paycheck to your retirement fund, you're not tempted to spend it first.

Not only do automatic contributions make it more convenient to save, but even just automatically enrolling in your retirement fund can also help you save more, according to a study from Fidelity Investments. Researchers found that of employees who were automatically enrolled in their 401(k)s, two-thirds of them increased their savings rate over the course of 10 years. On average, employees had been contributing 4% of their wages in 2008, which increased to 6.7% by 2018.

While you may not have a say in whether your employer automatically enrolls new employees in their 401(k)s, you can make an effort to set up automatic contributions. You can typically log in to your account's online portal to adjust how much you're contributing and how often. It only takes a few minutes, but it can dramatically increase your savings over time.

When you think about planning for retirement, it's easy to get caught up in the big, scary questions: Will I have enough saved to retire? How can I catch up when I'm behind on saving? What if I am never able to retire?

These fears can be paralyzing, and many people opt to do absolutely nothing when they feel worried about the future. But the best way to reach a long-term goal (like saving enough to retire) is to start with a short-term goal. This can be as simple as saving $500 in the next six months, creating a budget of all your expenses by the end of the month, or establishing a solid emergency fund within the next year.

And while it may seem old-fashioned, writing down these goals with a pen and paper can actually help you achieve them. Only 43% of people who simply thought about their goals were able to reach them (or make solid progress toward reaching them), according to a study from Dominican University of California. But when the participants wrote down their goals as well as action steps for achieving them, then sent their progress to a friend, 76% of people were able to reach those goals or make significant progress.

Saving for retirement may take a lifetime, but that doesn't mean there aren't quick and easy steps you can take along the way. By taking baby steps and focusing on what you can do right now, it will make it easier to get started -- and sometimes just getting started is the hardest part.