Social Security, the program millions of seniors depend on as a prime source of income, is getting a raise next year to the tune of a 2.8% cost-of-living adjustment (COLA). When we compare that 2.8% with previous raises, it's a notable boost. In fact, based on what the average beneficiary collects, it'll translate to about $39 extra per month.

Still, that doesn't mean seniors who are already struggling financially are out of the woods. Similarly, it doesn't mean that those in danger of meeting that same fate won't ultimately succumb to it. In fact, when we think about it, that 2.8% raise might ultimately serve the dangerous purpose of giving millions of seniors and soon-to-be retirees nothing more than a false sense of financial security. 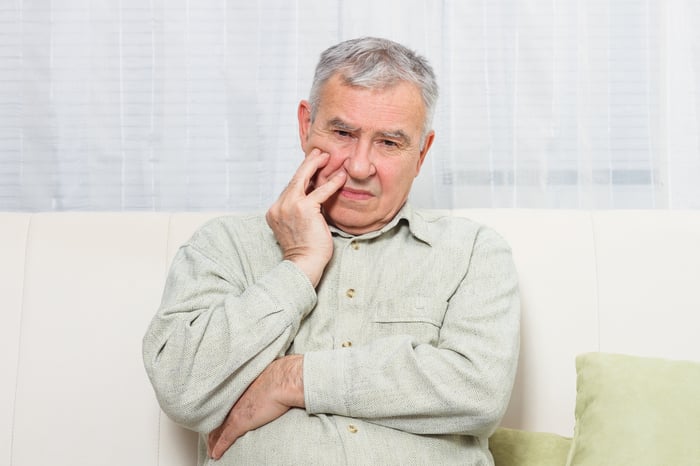 Social Security -- and its raises -- just won't cut it

A frightening number of seniors who collect Social Security also find themselves struggling to make ends meet, and it boils down to an overreliance on those benefits. Contrary to what many believe, Social Security was never designed to sustain seniors by itself. For the average earners, those benefits will replace about 40% of their pre-retirement income -- most seniors, in fact, need about double that amount to live comfortably.

Throw in the fact that the program's COLAs have been so stingy of late that they've caused seniors to lose 34% of their buying power since the year 2000, and it's clear that relying on Social Security without another key income source is nothing more than a recipe for financial disaster.

A recent study by the Schwartz Center for Economic Policy Analysis at the New School underscores this concern. An estimated 40% of middle class Americans will live in or close to poverty by the time they turn 65, and we can't ignore Social Security's role in that projection.

Furthermore, many economists strongly believe that today's poverty thresholds are so ridiculously low that they ought to be doubled to arrive at a more realistic level. If that's the case, then the official poverty line should, in fact, sit at $24,120, which is well above what the average senior will collect in Social Security next year.

For seniors who are already retired and reliant on Social Security, cutting back on living expenses and working in some capacity might be the only ways to avoid poverty. Working folks, however, have the opportunity to dodge that unwanted fate, provided they step up their savings game.

Working longer to maximize Social Security benefits is another step pre-retirees can take to avoid financial struggles later on. For each year benefits are delayed past full retirement age, those monthly payments get to grow by 8%, up until age 70. This means that someone who's looking at a $1,400 monthly benefit at a full retirement age of 67 could instead collect $1,736 a month -- for life -- by delaying benefits as long as possible.

While seniors are generally happy to hear of Social Security raises, many fail to realize that they're actually a double-edged sword. Those increases, by nature, are the result of inflation -- the very thing that zaps seniors' buying power faster than their benefits could ever keep up with. And the sooner more folks realize that, the better equipped they'll be to take control of their finances in retirement rather than risk poverty like so many older Americans do today.