The holiday season is officially upon us, which means many of us are spending every spare minute hitting the stores and searching the internet high and low for deals on gifts galore. But while this time of year is joyous in many regards, it can also be stressful -- especially for those of us who aren't prepared financially.

And make no mistake about it: A lot of us fall into that category. A frightening 48% of Americans don't do any financial preparation for the holidays whatsoever, according to a survey by GOBankingRates. It's no wonder, then, that more than 25% of U.S. adults have landed in holiday debt in the past. 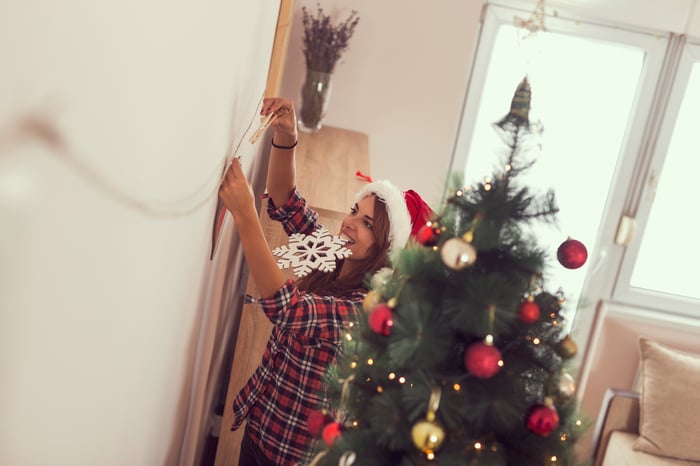 It's a bit too late to go back in time and prepare for this year's holiday season. But if you missed the boat for 2018, you can still pledge to do better next year. Here's how.

1. Set aside money in advance

There's no reason the holidays should catch you off guard, what with their arriving at the same time year after year. Yet only 23% of Americans set aside money for holiday expenses in advance, as the aforementioned survey shows.

Socking away funds throughout the year is one of the easiest ways to avoid holiday debt, so beginning in January 2019, start reserving a portion of each paycheck for next year's gift-giving extravaganza. How much should you set aside? It depends on how much you think you'll need to spend, but you can use this year's total tab as a reasonable benchmark. For example, if you end up plunking down $1,200 for gifts, you'll know to save $100 per month for holiday purposes next year.

One of the easiest ways to land in holiday debt is to let store prices dictate how much you spend rather than let your finances dictate your spending. A smarter approach to the holidays? Take a look at the resources you have available to throw at holiday gifts, and create a budget that lets you make the most of the money you have.

For example, if you have $800 to work with, figure out how many people you want to buy gifts for and how much you're looking to spend on each, and then seek out items that meet the criteria you've established. At the same time, be prepared to bypass items that don't fall into your budget.

Incidentally, a little less than 20% of Americans say they create a budget for the holidays. Surprisingly, millennials aged 25 to 34 are the most likely to map out a budget ahead of time, which means the rest of us should plan to follow suit.

Setting aside money for the holidays is easier said than done, especially when life's more pressing expenses (think car repairs and medical bills) get in the way. That's why it helps to secure a side hustle around the holidays. This way, you'll get your hands on a little extra cash that won't already be earmarked for another purpose.

Scoring a second gig isn't generally all that difficult around the holidays, as many businesses tend to see an uptick at that time. That said, it's not uncommon for businesses to secure that extra labor well in advance, so if you're serious about snagging a side hustle for next year's holiday season, aim to apply during the summer of 2019.

The more you plan in advance for the holidays, the less likely you are to walk away from them in debt. And that's a good way to start the new year off on a financially solid foot.