The holidays are the perfect period to bond as a family, enjoy quality time with loved ones, and spend money. But a large number of U.S. couples aren't seeing eye to eye on the holiday spending front. In fact, 30% don't agree to a holiday spending limit ahead of time, according to a new report by Quicken. As such, they're taking the risk that they'll end up hurting not only their finances but their relationships.

Holiday spending: A source of strife?

It's no secret that many couples argue about money, so much so that it's a major driver of divorce. And while the holidays might be a limited period during which things get stressful from a financial standpoint, the fact that nearly a third of couples find themselves out of sync over spending is hardly a passing trend. 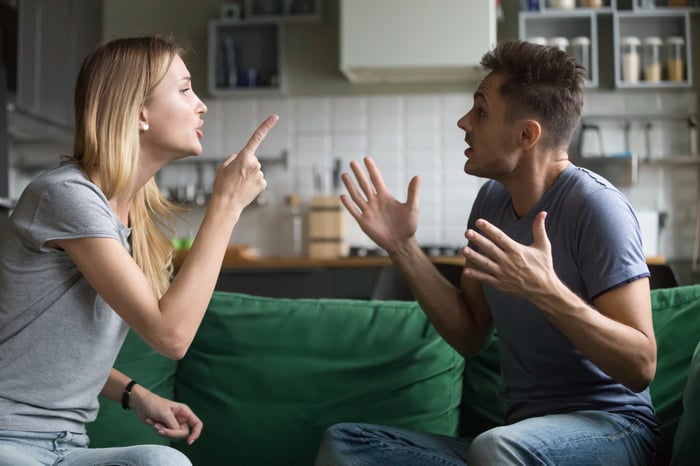 Of course, setting a holiday budget may not be the answer, either. In the aforementioned survey, 47% of folks who agreed to a spending limit with their spouse didn't actually stick to it. Worse yet, 47% of those who set spending limits with a spouse wound up deceiving that spouse about the amount they ultimately spent. And to add insult to injury, 28% of U.S. adults spent more on themselves during the holidays than on their spouses, while 20% forgot to get gifts for their spouses altogether.

Clearly, this behavior hardly sets the stage for marital bliss, but more dangerous than that is the fact that overspending can easily lead to holiday debt -- something Americans on the whole aren't strangers to. The average U.S. consumer racked up $1,054 in holiday debt last year, which is a substantial amount.

The problem with debt, of course, is that it creates a situation in which you're automatically paying more for the things you buy by signing up to get charged interest. Not only that, but too much debt can damage your credit score, thereby potentially causing you to delay or fail to meet other major goals. For example, if you and your spouse are set on wanting to buy a home in the coming year, but you pile on loads of debt during the holidays, you might fail to get approved for a mortgage. And that's the sort of thing that can lead to stress, fighting, and general unhappiness.

A better bet? Get on the same page with your spouse about holiday spending, set a budget jointly, and truly commit to sticking to it. That budget, by the way, should be rooted in reality, so take a look at the money you have available from savings and your paychecks and work backward from there. If you feel comfortable withdrawing $500 from a bank account to cover holiday purchases and know you'll have another $500 left over in your combined paychecks to throw into the holidays, then set your budget at $1,000 and prioritize your spending so you don't exceed that limit.

Though sticking to a budget isn't easy, if you and your spouse partner up on it and hold each other accountable, you'll increase your chances of spending reasonably and avoiding debt. It's a far better option than the alternative: racking up a massive credit card balance and having one more thing to fight about.