Here's your playbook if the bear market continues in the new year.

The S&P 500 recently dipped into bear market territory. While there's no way of knowing if the market will drop further, or if the end-of-year rally will hold up, it's always a smart idea to prepare for the worst.

Bear markets can certainly be scary, and nobody enjoys watching the value of their stock portfolio decline. However, if you take a step back and think strategically, you can make it through the turbulent times unscathed -- and even take advantage of the situation. With that in mind, here are five moves to make if the market continues to decline in 2019. 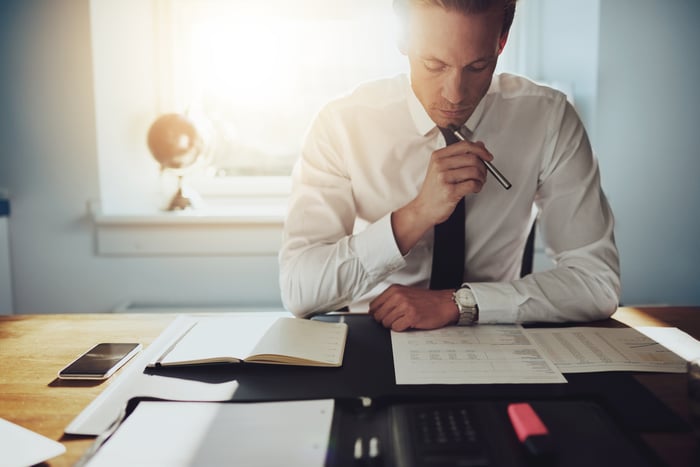 Make sure your near-term needs are met

In the modern (Post-World War II) era, the average bear market has lasted for 13 months, and it takes the stock market an average of 22 months to recover from it. Adding these two numbers together tells us that it's reasonable to expect a three-year wait before the market finally breaks through to new highs. Don't get me wrong -- we can certainly hope it goes quicker, but for planning purposes, let's assume that this is what will happen.

The point is that this can go on for quite a while, and stocks could potentially go down much more before things get better. In the average bear market, stocks lose 30.4% of their value, and we still have a long way to go until we reach that point. And keep in mind that this is just the average; sometimes it's worse..

Here's the takeaway: Before we talk about investment strategies, it's important to make sure your near-term major spending needs are met. For example, if you need to make a tuition payment to your child's college in a few months, it's not a smart idea to leave that money invested right now. At a minimum, I'd suggest keeping the money you'll need for major expenses within the next year or so in cash or equivalents.

As long as your short-term financial needs are taken care of, the absolute worst move you can make as an investor is to sell into a bear market. Just ask anyone who liquidated their portfolio in late 2008, or in the aftermath of the dot-com crash, how the move worked out for them.

Humans are emotional beings. When the values of our investments plummet, our emotions tell us that we should sell before things get any worse. The golden rule of investing is to "buy low and sell high." Selling into market weakness is the exact opposite of what you should be doing.

Let's say that you were out shopping at your favorite store. All of a sudden, the store manager got on the intercom and announced that everything in the store was 25% off. Would you panic, unload your shopping cart, and leave the store? Of course not. You'd probably buy even more. The same logic applies to bear markets.

To be fair, this isn't a perfect comparison. Obviously, if you knew that stocks were going to be 25% cheaper this month and would then go back up to their previous highs immediately, it would be a no-brainer. Instead, a bear market is like a major sale, but where the prices change constantly. You don't know if the items in the store (stocks) are going to be even cheaper tomorrow or if they'll be marked back up.

One way to get around this is to average into positions during this bear market. For example, I'm considering adding to my Apple (NASDAQ: AAPL) investment after the recent plunge. I think the stock looks ridiculously cheap in the $150s. However, it's entirely possible that the stock could go down even further -- especially if the broader market sell-off continues, or if a recession hits in 2019.

If you ask me, none of these are bad outcomes. On the contrary, if I invested all of my money today and Apple proceeded to go down, not only would my portfolio be worth less, but I'd have no money available to take advantage of the even-lower share price.

Rebalancing your portfolio is a smart thing to do whenever the stock market moves significantly in either direction. It's a good idea to make sure your portfolio is well balanced right now, and then check it again if the market continues to drop (or if it rises) in 2019.

Here's a simplified example. Let's say that you determine that a 75%/25% stock-to-bond ratio is ideal for you, so you invest your portfolio accordingly. Now let's say that stock prices fall by 30% but bond prices don't budge. If this were to happen, your portfolio would now have 68% stocks and 32% bonds. In order to maintain your desired asset allocation, you'll need to sell some of your bond investments and buy stocks.

In bear markets, not only does rebalancing keep your asset allocation correct, but it also naturally helps you to take advantage of lower stock prices.

Max out your retirement savings

The absolute best way to take advantage of the long-term power of discounted stocks in a bear market is to invest in them through a tax-advantaged retirement account. This way, you won't have to pay capital gains tax when you sell a stock at a profit, and you won't have to pay tax on the dividends your stocks pay -- all of your money will be free to compound until you need to withdraw it.

Bear markets can certainly be scary. And because it's been a decade since the last one, many investors -- especially younger ones -- are in unfamiliar territory.

The general takeaway is to stay the course. Smart investing is a decades-long process, and bear markets are a normal part of a healthy stock market. In fact, a 20% drop from recent highs (the general definition of a bear market) occurs once every three years or so. By holding on to your investments through the tough times, and strategically adding to them while they're down, you can use a bear market to set yourself up for long-term success.