Please ensure Javascript is enabled for purposes of website accessibility
Log In Help Join The Motley Fool
Free Article Join Over 1 Million Premium Members And Get More In-Depth Stock Guidance and Research
By Maurie Backman - Updated Jan 14, 2019 at 8:10AM

These blunders could wreck your golden years.

Many workers look forward to retirement, and understandably so. After all, your golden years are a great time to kick back and enjoy the fruits of your lifelong labor.

But retirement can also be a precarious financial period of life. Going from a steady paycheck to a fixed income can be a stressful prospect, and if you're not smart about the way you manage your money and expenses, you could really end up struggling financially. With that in mind, here are three retirement mistakes that could end up making your senior years miserable.

1. Filing for Social Security too soon

Your Social Security benefits are calculated based on your highest 35 years of earnings. The age at which you file for those benefits, however, could cause them to change, and not necessarily for the better. If you wait until you reach full retirement age, or FRA, to claim benefits, you'll get the full monthly payments your earnings record entitles you to. That age is either 66, 67, or somewhere in between, depending on the year you were born. 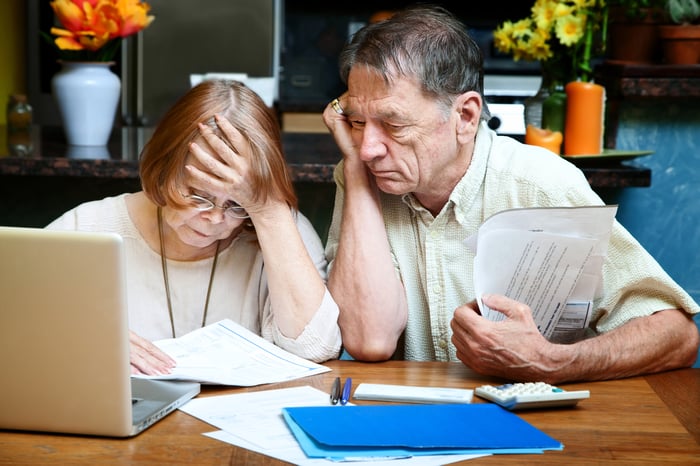 That said, you're allowed to file for benefits starting at age 62. Doing so gives you early access to that money, but it also means you'll reduce your benefits by a certain percentage depending on how far ahead of FRA you file. What this means is that if you retire before reaching FRA, it might pay to wait on Social Security until you've reached FRA or beyond, as you can delay benefits up until age 70 and grow them by 8% a year in the process. This way, you won't slash what could ultimately end up being a major income source for you in retirement.

Imagine you retire at 65 and have some savings to live on, at least on a short-term basis. If your FRA is 67, at which point you're entitled to $1,500 a month from Social Security, and you can get by without benefits, waiting those two years could save you a nice chunk of money -- specifically, $2,400 a year. Therefore, don't rush to claim Social Security if you retire before your FRA, because you could end up cutting your benefits for life.

2. Not signing up for Medicare on time

Medicare eligibility begins at age 65, and signing up on time can help you not only secure the coverage you need but also help you avoid expensive penalties that make your health benefits more expensive. Your initial Medicare enrollment period begins three months before the month in which you turn 65 and ends three months after the month in which you turn 65. If you don't sign up for Medicare during that period, you can sign up during the general enrollment period of Jan. 1 through March 31 of each year. But you might end up paying more for Medicare if you hold off too long.

Most Medicare enrollees don't pay a premium for Part A, which covers hospital visits. They do, however, pay a premium for Part B, which covers preventative care and diagnostics. If you don't sign up for Medicare during your initial enrollment period, you'll face a 10% increase in your Part B premiums for every 12-month period you were eligible for coverage but didn't enroll. And when you're on a fixed income, that added cost could really hurt you.

3. Not going in with a savings withdrawal strategy

Ideally, you'll enter retirement with a substantial nest egg. But if you don't establish a withdrawal strategy, you'll risk depleting your savings prematurely and running out of money later in life.

For years, financial experts have been promoting the 4% rule, which states that if you begin by withdrawing 4% of your nest egg's value during your first year of retirement, and then adjust subsequent withdrawals for inflation, your savings should, in theory, last 30 years. Though it's not a perfect rule, it's certainly a decent starting point to work with. That said, if you're retiring earlier than the average American (say, in your 50s), it's best to adopt a more conservative withdrawal strategy -- say, 2% or 3% a year -- since your savings will need to last longer. And on the flipside, you might get away with taking higher withdrawals, percentage-wise, if you don't retire until your 70s.

Along these lines, plan to be flexible during years when the market takes a downturn and your portfolio value drops. If you cut back on expenses when your investments are worth less and therefore withdraw less, your nest egg will take less of a hit. But if you take withdrawals blindly without adopting a strategy or understanding the consequences involved, it could cause you to lose money unnecessarily and, as previously mentioned, deplete your nest egg at a time when you're still very much alive and kicking.

Retirement can be a financially stressful period of life, but it doesn't have to be. Avoid these mistakes, and you'll be more likely to enjoy your golden years without the financial worries so many seniors face.