If you're carrying debt, you'd better make a plan to shed it quickly -- before it winds up following you to the grave.

Americans are hardly known for being great savers. If anything, they have a tendency to spend money and rack up huge loads of debt in the process. The problem has gotten so bad, in fact, that 65% of Americans in debt have no idea when they'll shed it. Worse yet, 25% of those in debt expect to carry it with them to the grave, according to CreditCards.com.

Now, not all of that debt is the bad kind in nature. Mortgage debt is the most common type among U.S. households, and it's a pretty healthy type to carry. Unfortunately, credit card debt ranks second behind it, and that's pretty much the worst type of debt to have. Not only can credit card debt cost you a boatload of money in interest, but it can also damage your credit score, thereby making it more expensive (if not impossible) for you to borrow money the next time you need to. 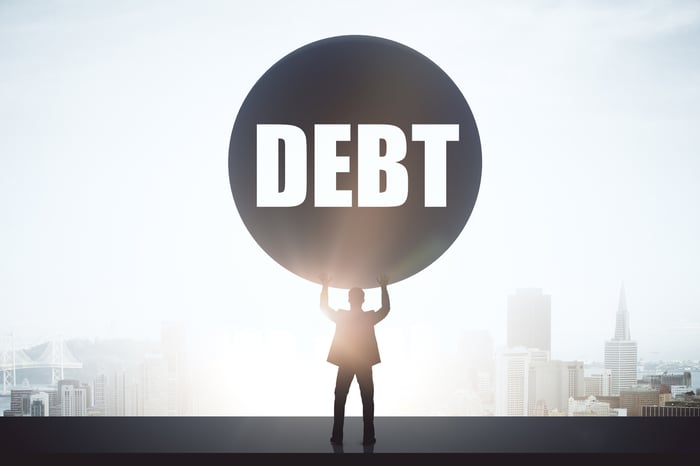 If you're currently in debt, it's imperative that you aim to shed it as early in life as possible. Otherwise, you might indeed carry it for the rest of your life -- and beyond.

The sooner you get yourself out of debt, the sooner you'll stop accruing interest that works against you. But it's especially crucial that you rid yourself of debt prior to retiring. Once you stop working and move over to a fixed income, you'll need every dollar of it to pay your living expenses, so having a nagging debt payment to contend with is the last thing you want. And while you might manage to squeeze out some extra money to apply to your debt while you're still working, once you're retired, extra money will likely be hard to come by.

So how can you get out of debt? First, figure out which debts of yours are costing you the most. If you have credit card debt, you're probably paying a higher interest rate on that than on your student loans, so it makes sense to tackle the former first.

Once you order your debts by payoff priority, you'll need money to make them go away. To that end, try creating a budget. It'll show you where your money is going, and where there's room to cut corners.

From there, you'll need to make some meaningful changes to free up cash to pay down those obligations. That could mean downsizing to a less expensive home, unloading a vehicle you can live without, or cooking your meals at home rather than dining out.

At the same time, look into getting a side job to drum up extra cash. You might consult in your current field, or turn a hobby into an income. It doesn't really matter what you do for additional money as long as you commit a little time to boosting your cash intake.

If you're nearing retirement with a wad of unhealthy debt, it pays to postpone that milestone until you've managed to rid yourself of it. Working an extra year or two might enable you to pay off your credit cards so that you don't continue accruing costly interest at a time in life when you really can't afford it.

That said, not everyone retires free of mortgage debt. If that's the scenario you're facing, and you can afford your home with the money you get from savings and Social Security, there's no particular need to panic -- especially since 30% of seniors today still carry mortgage debt. But ideally, your mortgage should be the only debt that hangs over you once your career comes to a close.

The fact that 25% of Americans expect to die in debt is pretty dire. If you're carrying debt, make lifestyle changes that allow you to rid yourself of it sooner. That way, you'll enter retirement without the weight of a nagging series of payments and the financial stress they're likely to cause.