When we think about financial planning, we tend to focus on things like building our IRAs or 401(k)s, paying off our mortgages in time for retirement, and socking away enough money to send our children to college. But there's one critical move that a large number of older Americans have yet to make: creating a will.

Almost half of Americans ages 55 and older don't have a will, according to a study by Merrill Lynch and Age Wave, despite the widely held belief that it's best to have one prior to age 50. If you're missing a will, it's crucial that you carve out some time to get that key document taken care of -- before something tragic happens and your heirs are left in the lurch. 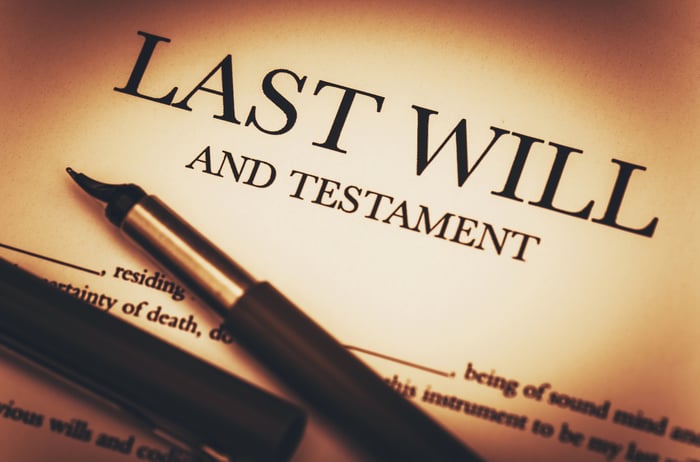 Creating a will might be among the most uncomfortable things you'll ever have to do in your life. But putting it off won't spare you the unpleasantness of having to contemplate your own mortality. The only thing it will do is put your family in a tough position if something does happen to you and you don't have that document in place.

Another reason people tend to put off wills is that they don't want to make their children uncomfortable by looping them into the process. Not only that, but grown children are often reluctant to take part in estate-planning conversations. Still, those discussions are important to have, especially if you're looking at a fairly large pool of assets that will need to be divvied up appropriately once you pass on.

Spare your children the stress

Having a will isn't something that only wealthy people do. If you have any assets you expect to leave behind, whether it be cash, investments, or a home, then you'll need to spell out what you want done with those assets once you're no longer around.

If you don't have a will, you won't get a say in how your assets are distributed; rather, the laws of the state you reside in will dictate how your investments and belongings are disbursed after your passing. In that case, you run the risk that your assets won't go to the people you want them to.

Furthermore, if you pass at a time when your children are still minors, you won't have a say in their care unless you've designated a guardian in a will. And that's a risk you absolutely can't afford to take.

Get your affairs in order

Creating a will is a fairly simple process, provided your estate isn't particularly complex. There's software out there you can use to create a will by yourself, but in many cases, you're better off enlisting the help of an estate-planning attorney to draft your will for you. You might pay just a few hundred dollars to have that document created (assuming you're getting a basic will), and if you have a legal plan through work, will creation might be a covered service that costs you nothing extra out of pocket.

Once you have that will, store it in a safe place. That doesn't mean putting it in a shoebox under your bed. Rather, invest in a fireproof safe and store it there -- but make sure to give your children or loved ones the combination so they're able to access your will in the event that they need to.

You'll often hear that the best place to store a will is your safe deposit box at your local bank, and that's true, provided your children or other trusted people in your life are given access to it. But if you're the sole account holder on that safe deposit box, your loved ones might need to jump through some legal hoops to get into it.

Furthermore, if you use a lawyer to create a will, he or she should keep a copy of it on record as well. In fact, that's another benefit to having an attorney create your will rather than going it alone.

Creating a will can be an unpleasant process -- but it's one you shouldn't put off. Having that document in place will give you peace of mind knowing that your wishes will be carried out as you desire, and that's reason enough to stop procrastinating and just get it over with.