Each year, the majority of taxpayers wind up with a refund after filing their returns. And while most filers are still expected to get money back from the IRS this year, those refunds are already coming in smaller than in years past.

Unfortunately, lower earners are feeling the pain the most. The median federal refund amount for tax filers with an adjusted gross income (AGI) of $30,000 or less dropped 10.6% for the 2018 tax year -- the most of any income group, according to Credit Karma. For the 2017 tax year, the median federal refund amount for filers with an AGI of $30,000 or less was $1,191. For 2018, it's just $1,065. Now that may not seem like a huge difference, but for lower earners who bank on their refunds to pay their bills, it's enormous. 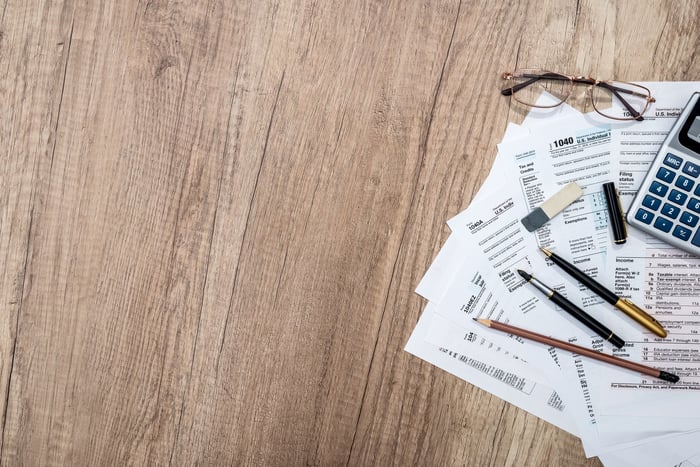 Worse yet, filers with an AGI of $30,000 or less who submitted their tax returns early saw a 9.2% increase in their median federal tax bill. And these are the folks who really can't afford to see their tax burden go up.

Interestingly enough, higher earners with an AGI of over $175,000 have seen the smallest drop in federal refunds for the 2018 tax year. They've also seen the second-greatest decline (8.3%) in federal tax bills among filers who owed the IRS money.

If you're a lower earner and are worried about a disappointing tax refund this year, here are a few key steps you might take.

1. File your taxes as early as possible

A big reason why refunds have been lower across the board for the 2018 tax year boils down to the massive tax overhaul that was put into place and the new withholding tables that followed. For the most part, employers were instructed to withhold less tax from workers in 2018 so that more money would land in their paychecks. As such, much of the money that many filers are expecting this season has, in fact, already been paid to them.

If you're banking on a large refund this year, aim to file your taxes as early as possible. This way, if that number comes in lower than anticipated, you'll have time to come up with a backup plan. Furthermore, if you saw a large boost in your take-home pay last year that didn't come as the result of a raise, you'll need to prepare for the possibility that you might owe the IRS money. If that's the case, filing your return sooner rather than later will give you more time to figure out how you'll pay that debt.

2. Don't adjust your withholding if you still get money back

If your refund comes in lower than expected this year, you might rush to adjust your withholding to avoid a repeat scenario during the 2020 tax filing season. But actually, that's a bad move.

See, a lower tax refund isn't a negative thing. All it means is that you collected more of your earnings up front, as opposed to waiting until tax season to get the money that's rightfully yours. On the other hand, if you find that you underpaid your taxes in 2018 and owe the IRS money, you might adjust your withholding to avoid landing in the hole the following year.

3. Make sure you're claiming the right tax credits

A tax credit is a dollar-for-dollar reduction of your tax liability, and it can save you money in a very big way. There are several tax credits designed to help lower earners, and claiming the right ones could provide some much-needed financial relief.

First, there's the Earned Income Tax Credit (EITC), which is worth as much as $6,431 for the 2018 tax year, depending on your earnings and number of dependents in your household. There's also the Child Tax Credit, which is worth up to $2,000 per child under 17 in your household. And if you pay for child care in order to work, you might qualify for the Child and Dependent Care Credit, which could put up to $2,100 back in your pocket depending on how much you spend on child care and how many children you have. Take your time doing your taxes, and be sure to research these and other credits to avoid missing out on a potentially lucrative break.

Generally speaking, shrinking tax refunds aren't a bad thing, as it means that workers on the whole are getting access to more of their income up front. But if you're a lower earner who's banking on a large refund, any sort of decrease could really hurt you. Prepare for that possibility, and at the same time, make sure you're claiming the right tax credits to score the highest refund available to you.