Hint: You probably won't be happy with the number.

You've probably heard that you're supposed to save for retirement during your working years rather than fall back on Social Security alone. But how many Americans are heeding that advice? A frightening 21% have no retirement savings, according to a 2018 Northwestern Mutual study, while 42% have less than $10,000 socked away for the future, according to GOBankingRates.

Now you're certainly aware that if you don't build any sort of nest egg of your own, you'll be forced to rely on Social Security to pay your bills in retirement. What you may not realize, however, is just how little money that will leave you with on an annual basis. 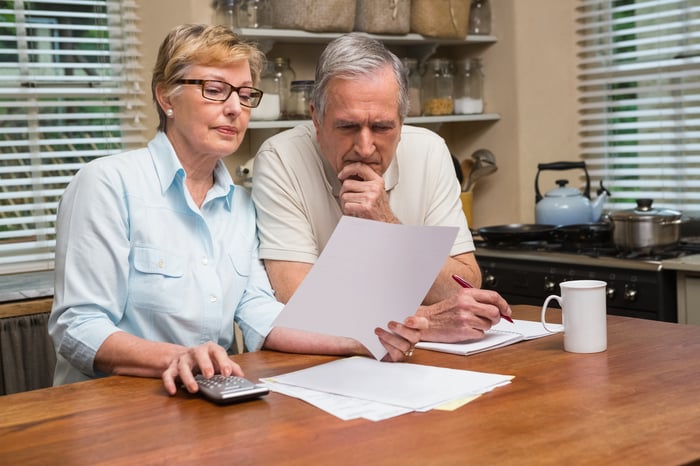 That's the amount the average Social Security recipient collects each year. It's also a mere $5,042 above the poverty limit for single adults in America.

Let that sink in for a second. A single $5,000 emergency, whether it be medical, car-, or home-related in nature, could drive you into poverty if you don't have savings outside of Social Security. And that's a risk you can't afford to take.

Many seniors expect their living expenses to drop dramatically in retirement, but much of the time, those bills largely stay the same. In fact, the typical senior needs around 80% of his or her previous annual income to live comfortably. Social Security, however, will only replace about 40% of your pre-retirement income if you were an average earner, thereby leaving you with quite the substantial gap to fill.

The solution? Save independently, even if it's just a few hundred dollars a month. If you invest that money wisely, it'll add up over time and give you a cushion to fall back on during your golden years -- especially if you're relatively young and have much of your career ahead of you.

Look at the following table, which illustrates how much savings you might accumulate if you were to save various amounts over a 30-year period:

Saving $100 or $200 a month, even over three decades, won't help you retire rich -- but it might prevent you from being poor. And in case you're wondering about that 7% return, it's actually a couple of percentage points below the stock market's average. If you load up on stocks, which you should feel comfortable doing as long as you're looking at a 10-year investment window or longer, you're likely to score that 7% if not higher.

Of course, to save any amount consistently over time, you'll need to commit to that goal, which means sacrificing some sort of immediate luxury that money would otherwise go to. Maybe that luxury is the weekly takeout order you look forward to, or the monthly concerts you like to attend. Maybe it's the cable plan you like to keep for the nights you're home and bored, or the gym membership you admittedly don't use all that often, but enjoy having nonetheless. It doesn't matter what expense you eliminate from your budget as long as it serves the key purpose of freeing up cash for you to save.

And if you really can't bear to reduce your spending at all, get a side job on top of your regular one. Working a few hours per week at a second gig could do the trick in giving you $100, $200, $300, or more to save each month, which, as you can see above, will go a long way over time.

Saving for retirement on your own is a good way to ensure that you don't struggle financially when you're older. And if you're still not convinced, ask yourself this: Could you really live comfortably on $17,532 a year? If not, consider this your wake-up call to do better in terms of savings, or else get ready for a host of money issues when you're older and far more vulnerable.