Were you one of them?

Now that this year's tax-filing season is getting close to wrapping up, Americans are feeling the impact of last year's tax code changes. And while some filers are coming out ahead as a result of that overhaul, that's far from true across the board.

Quicken conducted a survey and found that as of March 15, 52% of filers had completed their taxes. Yet 46% reported paying more federal taxes for 2018 than they did the previous year. Seeing as how the tax overhaul was hailed as a means of putting more money back in working Americans' pockets, a lot of filers are unquestionably unhappy -- and looking for answers. 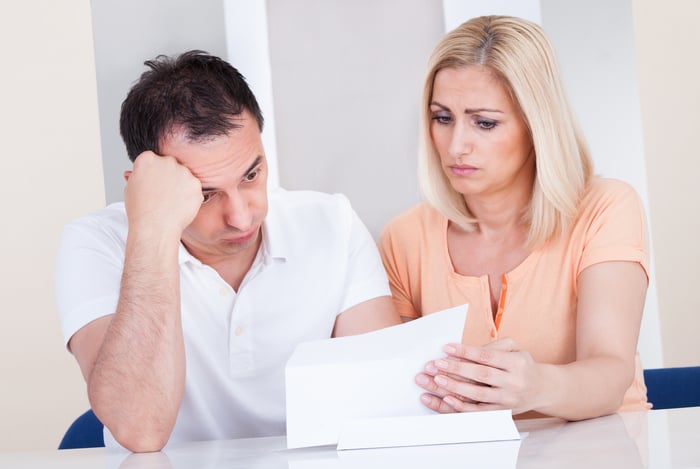 Who got hurt by last year's tax changes?

There are a couple of groups of filers who are likely to lose out under the 2018 tax overhaul. The first, unfortunately, are large families. The reason? Prior to 2018, filers were entitled to claim a personal exemption for themselves and each person in their household. In 2017, that exemption was valued at $4,050 per filer. Under the tax changes, that provision no longer exists.

What the tax overhaul did instead was nearly double the standard deduction from $6,350 to $12,000 for single tax filers and from $12,700 to $24,000 for married couples filing jointly. The tax overhaul also expanded the Child Tax Credit, which is available for children under the age of 17, from $1,000 to $2,000. These changes are no doubt helpful -- but are they enough to compensate for the loss of the personal exemption? Let's run some numbers to find out.

For 2018, however, that family is looking at a total of $24,000 between the standard deduction and personal exemptions, since the latter is no longer in play. That's a $13,000 drop. Even with an extra $2,000 in credits (thanks to the doubled Child Tax Credit), that family is likely to lose out.

Of course, these calculations don't take lower tax brackets into account. Another thing the 2018 tax overhaul did was lower virtually all individual tax brackets so that filers would pay less on their highest dollars of earnings, so, in our example, that same family could've gained a bit in that regard. The point, however, is to illustrate how a large family might lose out under the new rules.

The other group that's likely to see a higher tax bill for 2018 is folks who previously claimed a large SALT deduction. Short for state and local taxes, the SALT deduction, which includes property taxes, was previously unlimited. Effective in 2018, however, it's capped at $10,000 total. This means that a household that once deducted $5,000 in state income taxes and $15,000 in property taxes would only see half of that deduction for 2018.

Don't confuse your tax bill with your refund

Because the 2018 overhaul lowered almost all individual tax brackets, as mentioned earlier, many filers saw their paychecks go up during the year. As a result, some of the money that filers have been expecting in refund form hasn't come in, since it was paid to those same people already during the year. If that's what's happened to you, don't assume that your tax burden actually went up. It could be that it stayed the same or even went down, only you got your money in even installments via your paychecks rather than in lump-sum form at refund time.

Learn from this year's filing season

If the current tax-filing season didn't go the way you would've liked it to, talk to a tax professional to see what you can start doing differently. You might, for example, be best off claiming fewer allowances on your withholding if you owed the IRS a lot of money this year. Or, it could be that you just didn't take advantage of all of the tax breaks available to you. For example, if you had a 401(k) through work but didn't contribute, that's money that could've lowered your tax bill. It's not too late to make some adjustments for the current tax year so that come this time in 2020, you're looking at a more favorable outcome.