Are any of these on your radar?

After a slow start to the tax season, refund amounts are finally picking up, so much so that they're coming in higher than they did in 2018. As of March 15, 2019, the average filer's tax refund was $3,068, according to data compiled by Credit Sesame.

If you're getting a substantial refund this year, it pays to make the most of that money. Here are the five most popular things Americans have their refunds earmarked for, according to Credit Sesame.

A study released about a year ago found that roughly 80% of Americans carry some sort of debt, and while some of it is of the healthy variety (think mortgages), much of it stems from credit card balances. If you're in the latter camp, it absolutely pays to use your tax refund to chip away at your debt, or, if possible, eliminate it completely. Doing so will help you avoid wasting money on interest that you could instead use for other purposes. 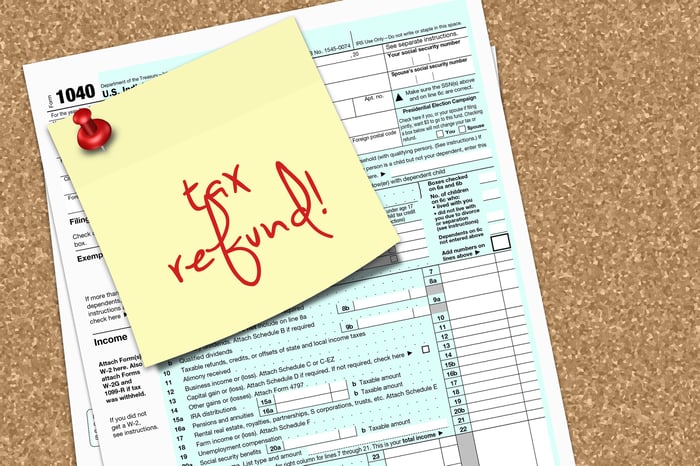 Just as importantly, knocking out bad debt can help improve your credit score. Of the various factors that go into determining that number, credit utilization plays a big role. Utilization speaks to how much of your available credit you're using at once. The more debt you carry, the higher that number, and the lower your score is apt to be -- so paying off credit card debt might actually improve your score, thereby making it easier and less expensive for you to borrow as needed going forward.

Last year, the Federal Reserve Board reported that 40% of Americans don't have the money in savings to cover a mere $400 emergency. If you're one of them, then a good place for your tax refund is none other than the bank. Without cash reserves, you'll be forced to resort to debt the next time an unplanned bill comes your way that your paycheck can't cover. And while you should, ideally, have an emergency fund with enough money to cover at least three full months of essential living expenses, starting with your refund is better than nothing.

The fact that many Americans plan to use their refunds to purchase everyday expenses underscores the problem with getting cash back during tax season in the first place. If you're planning to use your refund for basics, you should consider adjusting your withholding so that going forward, you get more money in your paychecks month after month. This way, you won't need to charge those essential expenses and potentially rack up debt in the process.

A large chunk of tax filers plan to use their tax refunds to make a major purchase. If you're planning to do the same, be sure you're set on the debt and savings front. There's nothing wrong with using your tax refund to buy furniture, update some appliances, or replace electronics that are becoming obsolete, provided you're not carrying a credit card balance and you have some emergency savings. But if that's not the case, use that lump sum to tackle those more important goals first.

Owning a home is a major undertaking. If you've been putting off projects due to a lack of funds, then using your refund for upgrades or repairs is a smart thing to do. Do yourself a favor, however, and focus on fixing things that are broken in your home before spending money on improvements. You might really want new countertops in your kitchen, but if your heating system needs an overhaul, you're better off sinking money into that first.

No matter what you plan to do with your tax refund this year, remember that the cash you get back from the IRS isn't free money. Rather, it's your money that you should've been collecting in your paychecks all along. As such, be sure to put it to good use rather than blow it recklessly -- especially since you never know how you'll fare during next year's tax season.