Please ensure Javascript is enabled for purposes of website accessibility
Free Article Join Over 1 Million Premium Members And Get More In-Depth Stock Guidance and Research
By Maurie Backman - Apr 10, 2019 at 6:36AM

The good news? It should benefit workers. The bad news? It might make their heads spin.

During the 2019 tax season, many workers learned the hard way that last year's tax overhaul had more of an impact than perhaps expected. One significant thing the new tax laws did was lower nearly all individual tax brackets so that workers would see their paychecks go up. To accompany this change, the IRS released new withholding tables last year that dictated how much tax employers were to hold back from employees' paychecks.

The result? Many workers got more money during the year, but less money back in refund form during tax season. And while that's certainly not a bad thing, many filers saw it that way.

If last year's withholding changes threw you for a loop, you may be less than thrilled to learn that more changes are on the horizon in this regard. The IRS is planning to release a new W-4 form that does a better job of estimating how much tax to hold back from workers' paychecks. And though getting that withholding just right will benefit workers, taxpayers should be warned that the new W-4 could be a far more complex version than its current counterpart. 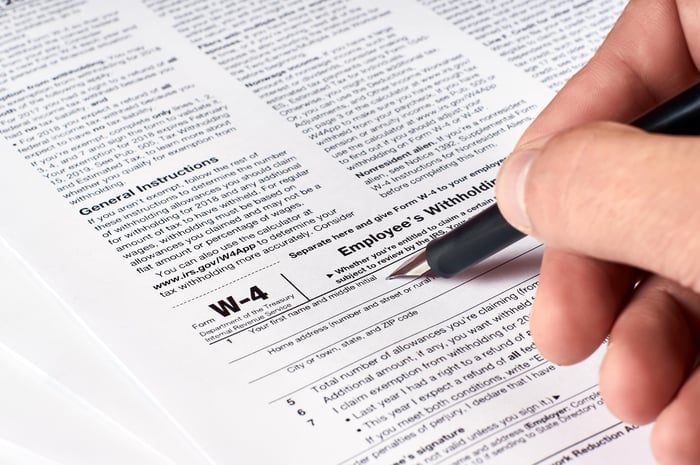 How are W-4s changing?

Form W-4 is also known as the Employee's Withholding Allowance Certificate, and what it does is let you decide how many withholding allowances to claim. The more allowances you have, the less money gets taken out of your paychecks during the year.

The new W-4, however, will be a far more detailed version of the current form. Though it hasn't been finalized, the IRS has indicated that the updated W-4 will ask for details on things like itemized deductions, tax credits, interest and dividend income, and total household income.

By contrast, right now, Form W-4 mostly takes workers' main job into consideration rather than incorporate outside factors -- though to be fair, the current form does include an additional worksheet that employees are advised to fill out for better accuracy. However, that worksheet, as it states itself, only pertains to filers who plan to itemize deductions, claim certain adjustments to income, or have a large amount of non-wage income that isn't subject to withholding (like freelance earnings).

Now in theory, asking for all of this information is a good thing, as it'll help ensure a more accurate level of withholding on a per-paycheck basis. Remember, your goal in having taxes withheld should be to break even so that when you sit down to file your annual return, you're not writing out a check to the IRS, nor are you receiving a whopping refund. Most filers can't actually break even -- doing so is extremely difficult, to the point where owing a few hundred dollars or getting that much back is as close as some people can currently hope to get. But by adding this level of detail to Form W-4, the IRS is hoping to increase filers' chances of reaching that break-even point.

The challenge, however, will be helping workers navigate the process of filling that form out. As is it, it's not uncommon for employees to claim the wrong number of allowances on a W-4 and have the wrong amount of tax withheld as a result.

Though the new W-4 isn't ready for circulation just yet, the IRS does plan to roll it out in time for the 2020 tax year. Until then, be sure to keep this year's tax documents on hand, as you may need them to fill out that form. You may also want to hang onto your accountant's number -- just in case you have questions once the new W-4 is released.