Please ensure Javascript is enabled for purposes of website accessibility
Log In Help Join The Motley Fool
Free Article Join Over 1 Million Premium Members And Get More In-Depth Stock Guidance and Research
By Maurie Backman - Apr 14, 2019 at 8:51AM

The quick answer: probably less than you think.

We're told we're supposed to save independently for retirement to avoid struggling during our golden years, but data from the U.S. Government Accountability Office tells us that nearly half of workers 55 and older are creeping toward that milestone without any personal savings to show for. And while part of that could boil down to poor money management, an overreliance on Social Security might also share the blame.

Many workers mistakenly believe that Social Security will suffice in covering their bills in retirement. But that's a misconception that could cause millions of Americans to wind up cash-strapped during their golden years. 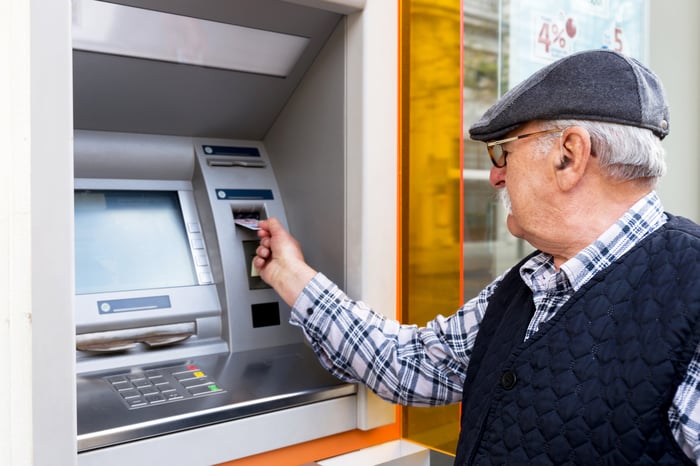 Social Security isn't meant to sustain seniors by itself. Those benefits will replace about 40% of an average earner's pre-retirement income. For higher earners, it'll replace an even smaller percentage. Meanwhile, most seniors need roughly 80% of their previous income to live comfortably. Those with lofty goals that involve extensive travel and nightlife might need considerably more. Either way, relying on Social Security alone is a truly bad idea, and one that could cause you to come up short once you stop collecting a paycheck.

If you're still not convinced, consider this: The average Social Security recipient today collects $17,532 a year in benefits. That's barely above the poverty line, and certainly not enough to support a comfortable retirement. Therefore, if you want to enjoy your golden years, get the following through your head: Social Security, in a best-case scenario, will only pay for half of your retirement. The rest of your income will need to come from you.

If you've been neglecting your savings thus far, consider this your wakeup call that Social Security alone won't cut it in retirement. Rather, it's on you to save enough to be able to enjoy your golden years. The good news is that you do have an opportunity to catch up on savings, even if you're on the older side and retirement isn't so far off.

Workers who are 50 or older can currently contribute up to $7,000 a year to an IRA, and $25,000 a year to a 401(k). Now if you're not in the habit of saving anything, you probably can't snap your fingers and start maxing out a 401(k) overnight. What you can do, however, is start saving something immediately, and then increase your savings rate as you make lifestyle changes that allow you to do so.

That's right: You'll need to seriously consider cutting back on expenses and saving the difference if you want a shot at a secure retirement. But think about it this way: If you don't make an effort to save today, you'll likely be forced to cut back on a lot of expenses in retirement -- things like cable TV and other luxuries you currently enjoy.

What will curbing your spending and banking the difference do for your nest egg? Imagine you're able to set aside $500 a month for the next 12 years. If you invest that money at an average annual 7% return (which is more than doable when you load up on stocks), you'll wind up with $107,000. Now frankly, that's not a ton of money to retire with. But it is a start. Furthermore, if you're able to set aside $1,000 a month over the next 12 years, you'll accumulate $215,000, assuming that same 7% return.

At the same time, if you're an older worker without much savings, you may have to get on board with the idea of working in some capacity during retirement. A part-time job that supplements your income by $300 or so a week can compensate for a minimal or nonexistent retirement plan balance. And you don't necessarily have to do something you hate -- you can take a hobby you enjoy and turn it into a income-generating opportunity.

While Social Security serves as a crucial income source for many seniors today, it can't pay for your retirement on its own. If you're an average earner, you can probably count on it to provide around half of your retirement income, but not more. The balance, therefore, will need to come from you in some shape or form.