Homeownership has long been a key piece of the American Dream, and in recent years, millennials have finally begun pursuing it in greater numbers. However, due to the limited number of starter homes on the market, as well as the challenges younger workers face in coming up with down payments, it has been difficult for many to achieve this milestone prior to their 30s or even 40s.

Given the financial realities, one common piece of advice given to those eager to become homeowners sooner is to move back home for awhile after completing college. That way, you can live in a rent-free or low-payment situation for a period of time, and take the opportunity to save up the money to buy. 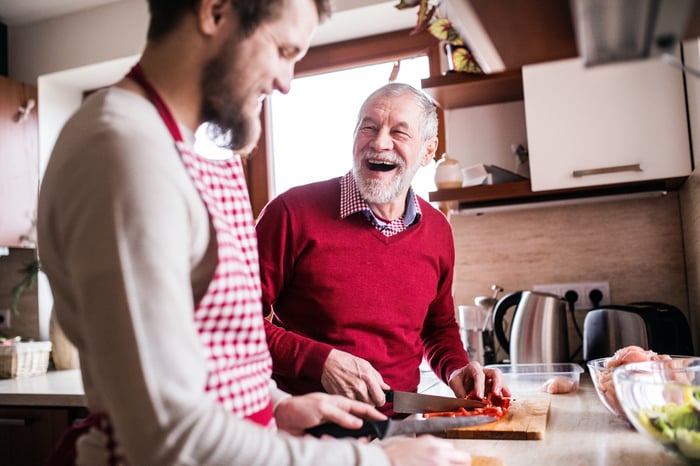 But new data from the Urban Institute actually tells the opposite story: Young adults are indeed moving back home, but those who live with their parents between the ages of 25 and 34 are significantly less likely to be homeowners 10 years later.

Why are young adults moving back in with mom and dad?

In the year 2000, just 12% of Americans between the ages of 25 and 34 lived with their parents. By 2017, that percentage nearly doubled to 22%. All told, that's 5.6 million more young adults than before who have neither a landlord nor a mortgage, and this pattern has yet to reverse, despite the relatively strong economy and job market we've been enjoying for years.

So why are so many folks returning to the nest, and staying? Student debt is heavily to blame. These days, 71% of college grads come away from their educations in debt, and Americans collectively owe more than $1.5 trillion in student loans. And since the rising cost of college has continued to meaningfully outpace inflation, students, in turn, must borrow more than ever to keep up. As such, large percentages of them graduate with daunting levels of debt, and find that moving back home is their best method for cutting costs and finding the flex in their budgets to pay those loans down.

At the same time, many younger adults do move back home with the express purpose of saving money for a down payment. So what result of that choice might be holding them back from buying? It could be that some grow used to the living arrangement, and choose not to take on the responsibility of having a home of their own. Or, it could be that living at home as young adults means they have less incentive to learn proper money management skills, and therefore don't save adequately to buy property, despite having the means to do so.

Given the wealth-building benefits of home ownership, this suggests that moving in with their parents could actually be hurting millennials in the long run. Buying your first home earlier in life makes it more likely that your mortgage will be paid off before you retire. Also, property values tend to rise over time, so owning for shorter periods could mean losing out on years of gains.

Are younger adults better off living on their own?

Given that a far lower share of folks who moved back home were property owners a decade later compared to those who flew the nest, you'd think living with parents post-college is a bad idea. But it's still a good one, provided you use it as an opportunity to build savings rather than as an excuse to delay taking on adulthood financial behaviors.

If you pledge to move back home only for a certain period of time or until you reach a certain milestone (say, paying off your student loans or saving a specific amount for a down payment), then you're less likely to fall into the trap of postponing key life milestones. And if you don't trust yourself to stick to that plan, recruit your parents as active collaborators. There's nothing like a little tough love (that you asked for in advance) to send you back out into the real world when the time is right.