It may be a helpful income source -- but can it take the place of savings?

If saving for retirement were easier, perhaps more people would do it. But it's hard to sock money away on a consistent basis when life throws more immediate expenses our way. Add in the fact that many Americans grapple with ongoing debt on top of their bills, and it's no wonder an estimated 33% of workers 55 and over have less than $10,000 set aside for the future.

For those without much in the way of retirement savings, Social Security often serves as a solution of sorts. But if you're lacking money in your IRA or 401(k) and are counting on Social Security to sweep in and save the day, it's time to rethink that strategy. 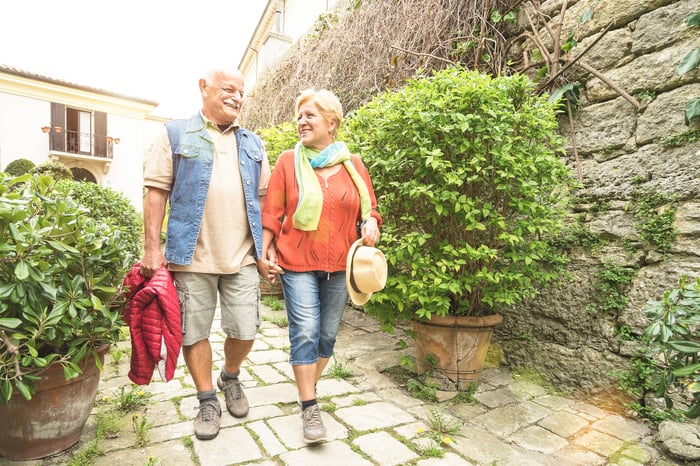 The average Social Security recipient today collects $1,461 a month, or $17,532 a year, in benefits. If you're an above-average earner, your Social Security benefits might come in significantly higher. Still, the maximum benefit this year is $3,770 per month, or $45,240 per year. That may be enough to buy some people a great lifestyle in retirement, but if you're entitled to that much based on your earnings history, then chances are you've gotten used to living on a lot more.

But let's assume that your benefits mimic those of what the majority of seniors collect: between $700 and $1,800 each month. Even the top end of that range is not a lot of money to live on.

In fact, Social Security is only supposed to replace about 40% of the average worker's preretirement income. Most seniors, however, need somewhere in the ballpark of 70% to 80% of their former earnings to live comfortably. And sure, you can cut back on some living costs to get by on less, but do you really want to land in a position in which you're living in a studio apartment without cable as a retiree because you lack the income to do better? Probably not.

Therefore, while you can and should factor Social Security into your retirement income, you shouldn't count on those benefits alone to make up for a lack of savings. Doing so is likely to leave you cash strapped and disappointed at a time when you deserve to be enjoying life.

Ramp up and change your plans

Though many older Americans are approaching retirement without much in the way of savings, as long as you have a few working years left, you can bolster your nest egg. Start by cutting back on living costs, getting a second job, or doing whatever it takes to free up cash to save. If you manage to set aside $600 a month for retirement over the next seven years, and you invest that money at a relatively conservative 5% average annual return, you'll end up with almost $59,000. That's not a ton of money, but it's better than none.

At the same time, it pays to consider extending your career to not only boost your nest egg but leave your existing savings alone for longer. Case in point: Saving $600 a month for 10 years instead of 7 will leave you with almost $91,000, assuming that same 5% rate of return.

You may also need to get on board with the idea of working in some capacity during retirement. Doing so may not be ideal, but if working 10 hours a week puts an extra $600 a month in your pocket, then that, combined with savings and Social Security, could be enough to help you live comfortably.

While Social Security may wind up playing a big role in your retirement, it can't sustain you in the absence of other income. Be mindful of that as you devise a strategy that allows you to enjoy your golden years.