The internet is loaded with tons of useful information about planning for retirement. Unfortunately, it's also loaded with misinformation that could hurt you. As a personal finance writer, there are two common retirement myths I hear or read a lot, and I'm here to warn you not to fall victim to them. If you do, you'll risk sentencing yourself to a cash-strapped existence at a time in your life when you deserve better.

1. Social Security can take the place of savings

Many people are led to believe that they'll manage to live just on Social Security in retirement. In most cases, however, that's just not doable. Today, Social Security pays the average recipient only $1,461 a month in benefits. Over the course of a year, that's $17,532. Meanwhile, the average retired household spends $46,000 a year. That's quite the disconnect. 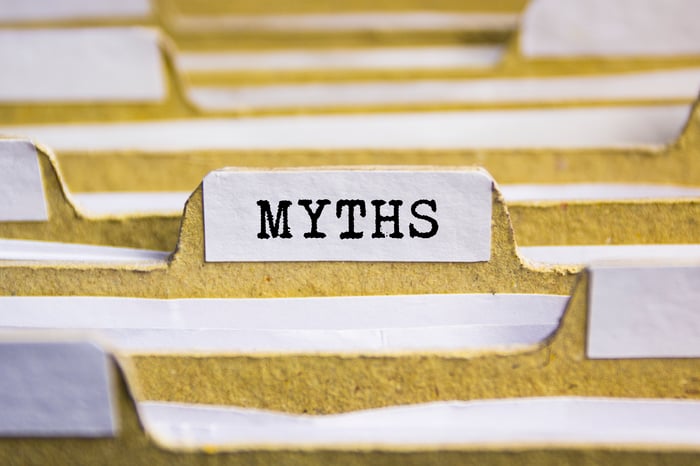 If you're an average earner, you can generally expect Social Security to replace about 40% of your pre-retirement income. Most seniors, however, need roughly double that amount to actually enjoy life. Retiring on Social Security without savings could therefore lead to many years of stress and misery.

2. Your living expenses will drop drastically

Many workers think that once they retire, their living costs will magically be cut in half. But when you think about the things you spend money on while holding down a job, you'll realize that your expenses aren't likely to change all that drastically once you stop reporting to work each day.

For example, you'll require housing during retirement, and even if your mortgage is paid off by the time your career ends, you'll need to maintain that home, do repairs, and pay insurance and property taxes on it. You'll also need a means of transportation, food, heat, electricity, and some type of communication (like a cellphone). These expenses won't necessarily differ from your working years to your retirement. Although you'll likely spend less on fuel in the absence of a daily commute to work, retiring won't reduce your auto insurance or monthly car payments.

And some of your living costs might actually go up in retirement. Take healthcare: As you age, medical issues are more likely to arise that cost you money, and since Medicare leaves participants on the hook for a host of financial obligations (premium payments, deductibles, and co-pays), your healthcare spending might very well climb.

You might also end up spending more on leisure, since you'll have more free hours during the day to occupy. Therefore, don't assume that your living costs on the whole will decrease by anywhere in the ballpark of 50%. Planning for a 20% to 30% reduction makes much more sense.

Save for your golden years

Hopefully, by now you're at least somewhat convinced that Social Security alone won't sustain you in retirement, and that your living costs will still be robust. That means you'll need savings of your own to avoid struggling financially later in life. The good news? You can build a nice amount of savings if you fund a nest egg consistently during your working years, as this table illustrates:

As you can see, the table assumes you're 30 years away from retirement and that your investments deliver an average annual 7% return, which is actually a few percentage points below the stock market's average. Furthermore, you don't need to part with an insane amount of money each month to build a solid amount of savings.

For example, to max out a 401(k) at today's rates would require a monthly savings contribution of nearly $1,600 to almost $2,100, depending on your age (workers over 50 can contribute more than younger workers). The figures above, however, represent a much lower monthly commitment.

Buying into the wrong information could destroy your shot at a secure retirement. Don't let that happen. Save for your golden years, because your expenses will be substantial, and Social Security won't cover them all by itself.