Don't be your own worst enemy.

No matter what plans you have for retirement, chances are you're looking forward to that milestone. But if you're not careful, you could end up wrecking your secure retirement and end up struggling financially instead. Here are a few habits that could contribute toward that unhappy, cash-strapped existence.

1. Not saving from an early age

The more time you give your money to grow, the more you stand to retire with -- it's that simple. On the flip side, putting off your nest egg contributions could result in a scenario where you're forced to retire low on cash, as the following table illustrates:

As you can see, if you contribute $300 a month to a retirement plan over a 40-year period, you'll wind up with $719,000 despite having put in only $144,000 of your own money. That's because you'll be able to use the power of compounding to grow your wealth. But if you wait until you're older to start saving that each month, you'll see fewer gains and a less impressive ending balance. 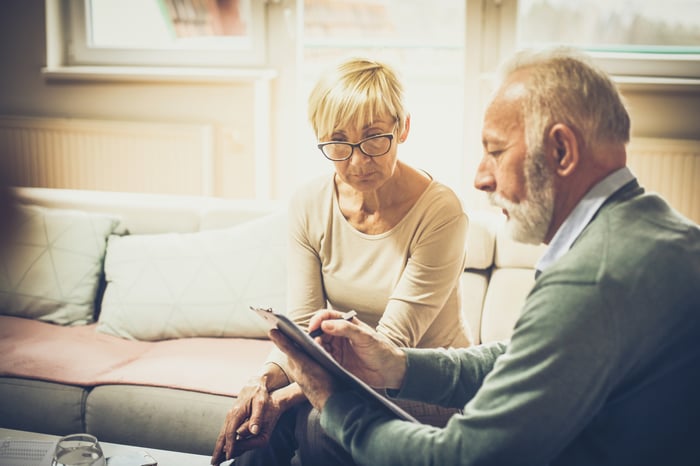 The gains we saw in the table above are based on a 7% average annual return, which is more than doable when you invest the bulk of your retirement savings in stocks. But if you invest too conservatively, you'll limit your savings' growth and wind up with less money to work with once your career ends.

Imagine that instead of focusing on stock investments, you play it safe and go heavy on bonds, thereby generating just a 4% return over the course of your savings window. Here's what the above numbers would look like under that scenario:

As you can see, investing too conservatively over a 40-year window could leave you with $342,000 in savings instead of $719,000. And that could seriously restrict your retirement lifestyle.

Some people shy away from stocks for fear of losing money, and that's understandable. But investors who hold quality stocks for a long period of time tend to come out ahead despite market fluctuations along the way.

3. Counting too much on Social Security

Social Security will likely be a sizable income source for you in retirement, but it shouldn't be your primary (or only) one. Those benefits will only replace about 40% of your former income if you earned an average wage, and most seniors need roughly double that to live comfortably and pay for expenses outside of basics like housing, transportation, food, and utilities.

In fact, the average Social Security beneficiary today only collects $1,461 a month, or $17,532 a year. Neglecting to build savings could therefore force you to live mostly on Social Security, and struggle as a result.

Once you retire, there's a good chance you'll spend more on healthcare on an annual basis than you did during your working years. That's because health problems tend to arise as people age, and because Medicare leaves you on the hook for numerous costs, from premium payments to deductibles to co-pays.

Fidelity estimates that the average 65-year-old couple retiring this year will spend $285,000 on healthcare throughout retirement when we account for the aforementioned costs under Medicare. And that's just one figure. HealthView Services, a provider of cost-projection software, thinks the healthcare tab for the average healthy 65-year-old couple will be almost $364,000 throughout retirement. None of these figures, by the way, include long-term care, which covers assisted living and nursing homes.

The takeaway? Read up on what healthcare might cost in retirement, and pad your savings so you're not left scrambling down the line.

A few unfortunate decisions on your part could set the stage for a miserable retirement when you deserve better. Start saving early in your career, invest in a reasonably aggressive fashion, understand how much money Social Security will give you, and recognize how much healthcare might eat away at your income. Doing all of these things will put you in a better position to enjoy a comfortable, dignified lifestyle after retiring.