Please ensure Javascript is enabled for purposes of website accessibility
Free Article Join Over 1 Million Premium Members And Get More In-Depth Stock Guidance and Research
By Maurie Backman - Jul 1, 2019 at 6:18AM

The good news? It's a problem workers have the power to address.

Without independent savings, retirees risk struggling to keep up with their bills at a time in life when generating extra income may not be so easy. Contrary to what some have been led to believe, Social Security doesn't provide enough income for seniors to live on.

Those benefits only replace about 40% of the average worker's earnings, and retirees generally need somewhere in the ballpark of 70% to 80% of their previous income to live comfortably. The difference, in many cases, needs to come from personal savings. (The exception is if you happen to have a generous pension, money from an inheritance, or another substantial income source.)

Unfortunately, a large number of workers today aren't saving for their golden years, and the reason boils down to having too much debt, according to the Employee Benefit Research Institute. Specifically, 60% of workers admit that their debt level is a problem and 70% say their debt has impacted their ability to set aside funds for retirement. If that's the scenario you're facing, it's imperative that you knock out that debt and free up money to fund your nest egg. Otherwise, you're apt to struggle later in life. 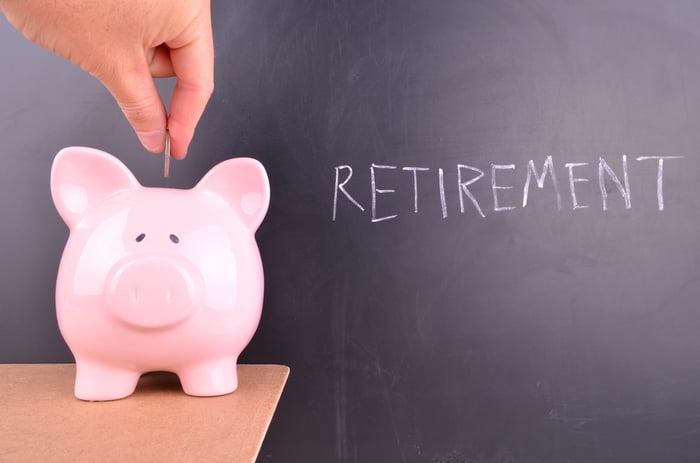 The problem with having debt is multifold. The longer you carry debt, the more interest you risk racking up, thereby compounding the problem. Furthermore, large levels of debt can drag your credit score down, and once that happens, it'll be more expensive to borrow again, thereby making it even harder for you to dig out of your hole.

Additionally, the more of your income you're forced to allocate to debt payments, the less money you'll have available to fund a retirement plan. And that could really put you in a tough spot for your golden years.

Even if you're only making relatively small monthly debt payments at present, think about what that money might instead do for your IRA or 401(k). Imagine you owe your credit card company $200 a month as a minimum payment and expect it to take a decade to pay off your balance under that payment plan. If you were to save that $200 a month instead over a 10-year period and invest it at a 7% average annual return (which is more than doable with a stock-heavy portfolio), you'd have $33,000. If you were to then leave that $33,000 alone and not add another dime but keep it invested for 20 more years at an average annual 7% return, you'd wind up with $128,000. And that's why you can't let your debt problem linger for too long.

How do you put a stop to it? First, examine your budget or create one if you don't have one yet. Next, comb through that budget and identify expenses to slash immediately, whether it's larger ones like your rent or car payment or smaller ones like your cable package or gym membership. Once you start cutting expenses, you can take the money you save and use it to slowly, but surely, chip away at your debt.

At the same time, look at getting a second job on top of your main one. The extra money you earn from it can be used to knock out your debt. Or you can use your primary salary to pay off your debt and use your secondary earnings to start saving for retirement sooner rather than later.

Too much debt can not only upend your finances at present but prevent you from dedicating funds to the nest egg you really ought to be building. Be proactive in getting yourself out of debt so that your golden years don't end up suffering because of it.