You pay into Social Security throughout your working life and you understandably can't wait to start getting money back from the program when you're older, but too many people rush to sign up for benefits as soon as they turn 62 without considering the consequences. This might be the best move for some people, but if you expect to live into your late 80s or 90s, you're shortchanging yourself by signing up as soon as you're eligible.

When you begin claiming Social Security affects your benefits

You become eligible for Social Security at 62, but you don't have to start claiming benefits right away. In fact, during so could hurt you in the long run. The Social Security benefit formula bases your check size on your average indexed monthly earnings (AIME) during your 35 highest-earning years. But if you'd like to receive this amount, you must wait until your full retirement age (FRA) to begin claiming. This is 66 or 67 for today's workers. 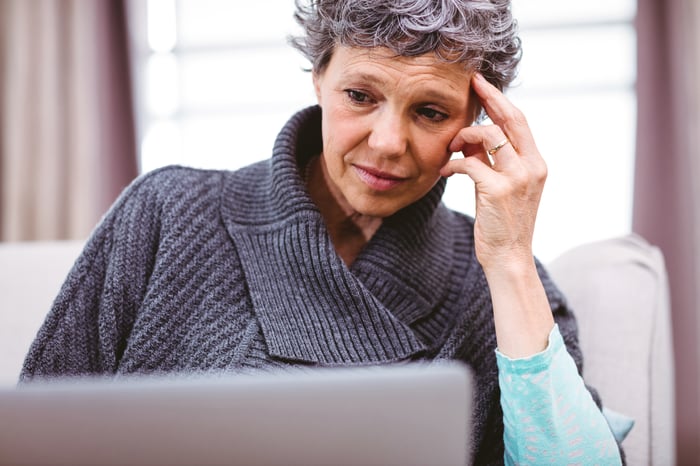 Every month you claim benefits before your FRA, your checks decrease. If you begin right away at 62, you'll only get 70% of your scheduled benefit if your FRA is 67 or 75% if your FRA is 66. To put that in perspective, let's consider the average Social Security benefit check, which is $1,472 per month as of July 2019. If you were entitled to this at 67 and you begin claiming benefits at 62, you'd only get $1,030 per month.

Your checks don't increase once you hit your FRA, so by starting early, you're permanently reducing the amount you receive over your lifetime. Let's return to our previous example. If you started Social Security at 62 and received $1,030 per month, that comes out to $12,360 per year. If you claimed benefits for 30 years -- which is not unreasonable, considering the Social Security Administration estimates that one in three 65-year-olds today will live past 90 -- you'd receive $370,800 over your lifetime. If you'd waited until 67 to claim benefits, you'd receive $1,472 per month, or $17,664 per year. Assuming the same life expectancy, you'd only claim benefits for 25 years in this scenario, and that adds up to $441,600. If you live even longer, the differences between the two amounts grow even more.

There's a third option we haven't discussed yet and that's delaying retirement benefits beyond your FRA. Doing so will increase your checks until you reach the maximum benefit at 70. This is 124% of your scheduled benefit per check if your FRA is 67 or 132% if your FRA is 66. If you intend to live a long life, this is probably the way to go if you want the most benefits.

How to decide the right time to start claiming Social Security

Claiming Social Security at 62 could be the right decision if you don't expect to live long, but you won't know until you estimate your lifetime benefit at different ages. Rather than working with averages like in the example above, create a my Social Security account so you can get personalized estimates of your benefits at 62, your FRA, and at 70. Estimate your life expectancy and figure high to be safe. Then, multiply your benefit estimates by the number of months you expect to receive benefits to figure out which starting age gives you the most overall.

Waiting is usually better if you think you'll have a long life, but even if you'd like to wait, you may not be able to afford to. Delaying benefits places a greater burden on you in the early years of your retirement because you must cover all of your expenses on your own. You must weigh this as well and you may have to start benefits a little earlier than you'd like to help you cover your living expenses.

Another option for couples is for the lower earner to start claiming benefits right away at 62. This enables the higher earner to delay benefits until 70 when they'll receive more per month. The lower-earning spouse will automatically be switched over to a spousal benefit at this point if it's higher than what they're entitled to based on their own work record. This works well if one spouse makes significantly more than the other. If both spouses earn about the same, it makes more sense for both to delay benefits as long as possible.

Taking Social Security benefits at 62 isn't inherently wrong, but doing so without understanding the consequences of your choice could result in you losing out on tens of thousands of dollars over your lifetime. Choose your starting age carefully so you can get the most out of Social Security and ease the strain on your personal savings.