Please ensure Javascript is enabled for purposes of website accessibility
Log In Help Join The Motley Fool
Free Article Join Over 1 Million Premium Members And Get More In-Depth Stock Guidance and Research
By Dan Caplinger – Sep 23, 2019 at 11:02AM

Some want higher taxes, while others want cuts.

The primary goal all investors share is to make investments that produce more money than you initially invest. Yet even with a successful investment, you'll typically end up having to share some of your profits with the IRS in the form of capital gains tax.

Capital gains taxes have been in the spotlight again lately as lawmakers on Capitol Hill consider various proposals that would change the current taxation of investment profits. Presently, if you sell an investment you've held for longer than a year at a profit, then you'll face long-term capital gains tax rates that depend on your taxable income. Currently ranging from 0% to a maximum of 20%, the rate on capital gains is lower than what you'd pay on most other types of income.

Legislative proposals are aiming to change that. On the one hand, many Democratic lawmakers want to boost the maximum capital gains rate well above 20%. Presidential candidate Joe Biden would increase the top rate on long-term capital gains to 39.6% for those making $1 million per year. Democratic Sen. Ron Wyden of Oregon would go a step further, taxing long-term capital gains at the same rates as ordinary income and also forcing people to pay those taxes even for gains of investments that they haven't yet sold. Those rates could be well above what investors have paid over the past 35 years. 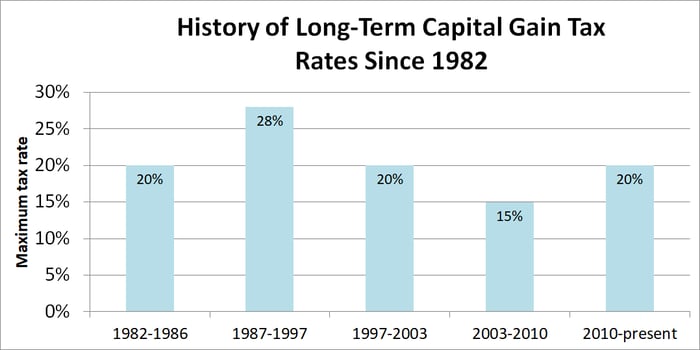 On the other hand, Republicans are looking at ways to have investors pay less in capital gains tax. Rep. Devin Nunez, R-Calif., would redefine capital gains by taking inflation into account. So for instance, if you sold an investment for $2,000 that you initially bought for $1,000, but prices as reflected by official government inflation figures have doubled since you bought the investment, then your inflation-adjusted capital gain would be zero and you wouldn't owe any tax at all.

Rather than being concerned about capital gains tax rates, most individual taxpayers can benefit by focusing instead on using tax-deferred investment vehicles like IRAs and 401(k) accounts. Investment sales within those accounts don't require you to pay tax at the time of sale at all. Yet with policymakers making arguments about wealthy taxpayers owning the lion's share of investments, controversy about appropriate treatment of capital gains is likely to last at least until the 2020 elections.